On Saturday night, the daughter of Forbes Burnham and the son of Cheddi Jagan stood side by side on the same stage as they joined hands to support the APNU+AFC Coalition. Late Guyana Presidents Forbes Burnham and Cheddi Jagan stood together decades ago as they fought for Guyana’s independence.

Although, they went their separate ways politically, they have both been remembered for their contributions to Guyana and their efforts to ensure a united Guyana.

On Saturday night, the daughter of Forbes Burnham and the son of Cheddi Jagan stood side by side on the same stage as they joined hands to support the APNU+AFC Coalition.

In offering her support to the coalition, Ms. Ulele Burnham told the thousands of persons gathered at the Square of the Revolution that the elections on Monday are about Guyana and all of its people.

She said the work will go on long after Monday and it is the people who will have to hold the “new government” accountable and responsible to their needs.

“Do not just hand over your power to another set of people and expect them to do things for you. Continue to be mobilize and keep showing the leaders of the coalition that it was you and not they, who worked the magic”. 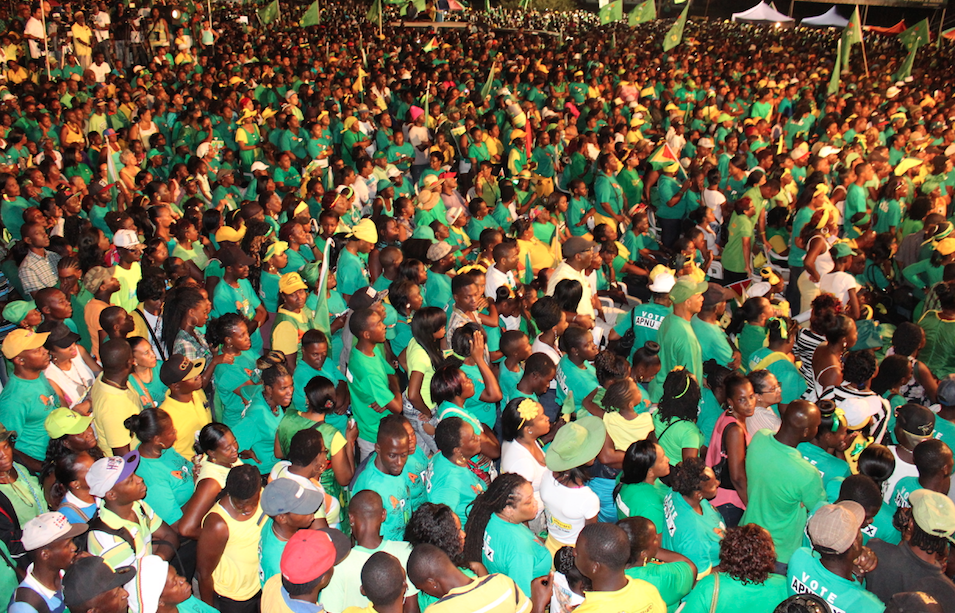 Ms. Burnham said next Monday will be a “magic Monday” as the people of Guyana unite to change the government. “It will not come without work because none of us is a magician”.

Dr. Cheddi “Joey” Jagan told the crowd that on Monday “God’s will be done” and the coalition will be the answer because “Burnham and Jagan knew that and Moses and David know that also”

He said its time for all Guyanese to enjoy a slice of the Guyanese pie. According to Dr. Cheddi Jagan Jr., the coalition was the dream of Guyana’s two late presidents and Guyanese should realize that dream by voting for the APNU+AFC coalition on Monday.

This was a first time that a Burnham and a Jagan shared the same political stage in over 50 years.