Major Pompey was asked why the team didn't at least interview the relative of two of the miners who were killed and who first made the claim against the Joint Services. A Joint Services investigative team that probed the June 2008 murder of eight miners at Lindo Creek is being called upon to provide reasons why it did not interview any civilian before it completed its probe and offered its findings.

The report from the investigation which lasted just about two weeks cleared the Joint Services of any blameworthiness but Chairman of the ongoing Commission of Inquiry, Justice Donald Trotman was particularly concerned that no civilian was interviewed as part of the probe.

Appearing before the Commission to answer these questions was Guyana Defence Force Major, Andy Pompey who back in 2008 headed the investigating team. At that time Pompey held the rank of Commanding Officer, Intelligence.

Major Pompey said those interviewed included two GDF pilots and members of the A and B team who were carrying out Joint Services operations in the area at the time.

He explained that while no specific instructions were given, the team was restricted from interviewing civilians and was only allowed to interview members of the Joint Services who voluntarily appeared before them.

But the instruction which came from then Chief of Staff Gary Best was only to investigate the circumstances of deaths and the allegations of involvement of the Joint Services.

Major Pompey was asked why the team didn’t at least interview the relative of two of the miners who were killed and who first made the claim against the Joint Services. 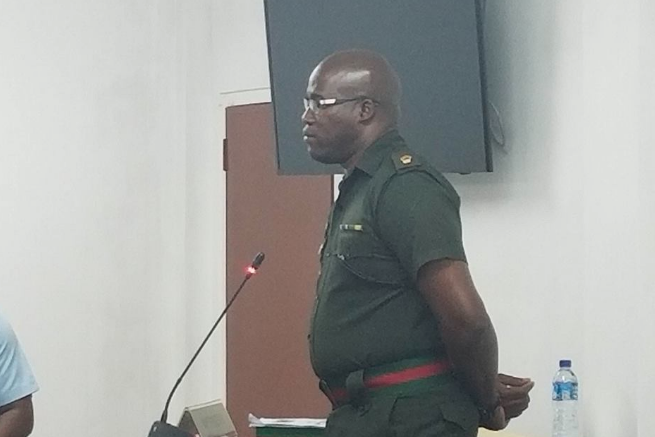 To that Pompey said “it was a tense time and we were instructed to conduct interviews and do an investigation with persons of the teams.”

He said those persons came before them and they never ventured out to conduct interviews with other persons.

That investigation found that the killings occurred sometime between 11th and 21st of June 2008 and the motive was either robbery or because the killers believe the miners were informants.

The four-man investigating team had concluded then that the allegations of murder against ranks were pure speculation and it also noted that all arms and ammunition were presented and accounted for.

The team was given 10 terms of reference along with eight other areas of investigation to address, Major Pompey told the Commission.

He said too that the Joint Services may have erred during the launch of its operations in the area at the time since they knew of the mining camp at Lindo creek but never physically visited the area or sought to ensure that the miners were evacuated while the operation was ongoing in the area.