Finance Minister Winston Jordan will later today lay the 2016 Mid Year Report on the performance of Guyana’s economy in the National Assembly, when the House meets for the final sitting before the annual recess.

The Finance Minister said the document presents more bad news for the naysayers as he pointed out several highlights of the report at a Monday morning press conference.

Jordan boasted that this was the first time that this report was being presented before the annual Parliamentary recess which usually convenes on August 10.

On the up side, the economy grew by two percent which was up from the 0.9% growth it recorded for the first half of 2015.

Jordan described the performance of the economy as “very good” and attributed the overall growth to the successes of the mining and quarrying sector which grew by 65.7%.

He said gold production increased by 93.3% while bauxite grew by 2.2%.

Other crops and fisheries also recorded a 2% growth while revenue collection grew by 9%. Exchange rates have remained stable.

But there was also bad news to report, with the agriculture sector contracting by 10%.

This, Minister Jordan said, is due to the huge shortfall in sugar and rice production which were down by 30% and 26% respectively. 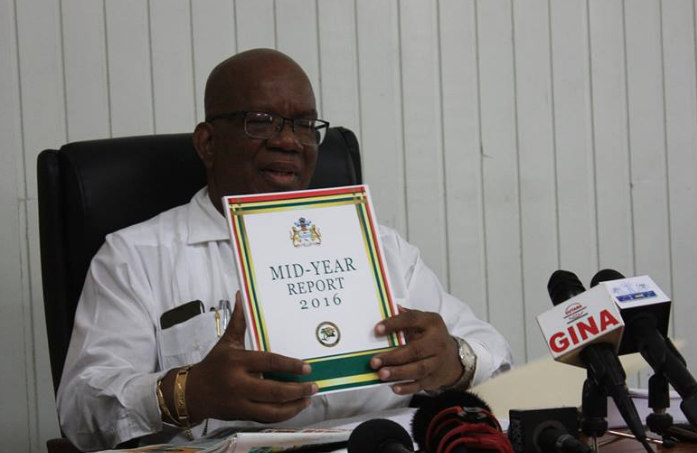 As a consequence, the manufacturing sector also experienced a 14.1% contraction.  Inflation stands at 1.1% at the end of the first half.

The slight reduction in the overall projection, Jordan explained, is because there is belief that sugar and rice will not recover from the fairly high shortfall from the first half of the year.

The Minister said the country’s reserves are healthy and reported growth in broad money, increases in credit to the private sector and overall lending.

More details on the economy’s performance for the first half of 2016 will be revealed when the document is laid int he National Assembly later today. “We didn’t skimp on details,” he added.

Jordan said the government believes this is a huge accomplishment in keeping with its mantra to improve transparency and accountability in government.