Scores of persons flocked the Sandy’s Funeral  Home in Georgetown on Thursday midday to bid farewell to murdered gay sex worker Carl Sinclair who was also known as Tyra.

From mid morning, over 200 persons, mostly women, gathered at the funeral home for the  beginning of the farewell service. Many of them appeared curious and whipped out phones and cameras to snap photographs of arriving sex workers and members of the Lesbian Gay, Bisexual and Transgender community, who were also there to pay their respects.

Outside the funeral home, it appeared more like the premier of a hollywood movie than a funeral as persons rushed forward to greet and hug many of the other gay sex workers and cross dressers as they arrived dressed in black and red dresses with matching heels.

The colours were chosen to protest the murder and many also carried special pins on their outfits that called for more tolerance in the community for member of the LGBT Community.

When the body of Sinclair was brought out by the parlour to the viewing area, the immediate family members were first allowed to view the body and eventually other mourners and the curious were allowed to file past the wooden casket.

Contrary to reports in another section of the media, members of the LGBT Community were not prevented from viewing the body. In fact, many of them were among the first group of people allowed into the viewing area. Some stood silently and stared at the remains while others wept quietly.

Sinclair was clad in a black men’s suit and a red shirt. His face was without make up and the accessories that he wore as a member of the LGBT community. That decision by the family surprised  many of those gathered who whispered as to why Sinclair was not being buried in the clothes that “made him comfortable”.  One family member was overheard telling a mourner that the man was being buried in the type of clothing he mostly wore.

The body was eventually removed from the parlour and taken to a church on the West Coast of Demerara for funeral service. 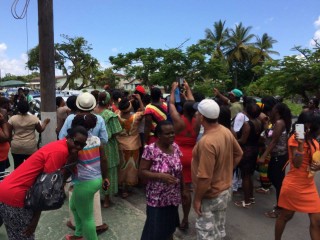 Sinclair and another transgender was murdered two Sundays ago  in downtown Georgetown by the ex lover of a sex worker who had apparently became peeved that he was dumped by his gay lover for a life on the streets. That man, Sean Bristol, eventually took  his own life hours after the double murder.

The other transgender, Jason John aka Jada,  who was murdered, is expected to be laid to rest next Monday.