Thirty-five officers of the Guyana Police Force should be better able to interview and interrogate suspects and analyse crime scenes and criminal activity, now that they have completed training programmes completed by the United States Federal Bureau of Investigations.

The five-day programme which was held at the Police Training Centre in Georgetown ended on Friday and brings the curtains down on another U.S funded project which falls under the Caribbean Basin Security Initiative (CBSI).

The participants were exposed to modern interview and interrogation techniques that ought to put investigators in a better position to solve cases by closely monitoring the action and words of suspects while they are being questioned. That part of the Programme was led by FBI Supervisory Special Agent Rhonda who said “the only boundaries that criminals know are the boundaries that we in law enforcement working together, set up for them, the traps that we put in place”.

She noted that the participants were provided with information and techniques that cover active listening and interview structures, while also looking at the importance of taking statements and analyzing those statements”.

The training programme came at a time when the Guyana Police Force is coming under increasing pressure to conduct interviews and interrogation in a more humane way. Two Police Officers are currently before the courts, charged with shooting a 15-year-old in his mouth while he was being questioned about witnessing a crime. 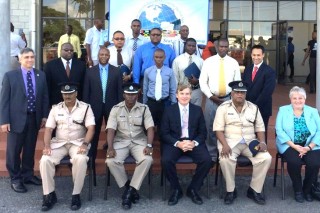 Another Police Officer is facing possible charges for burning the hands of another teenager during an alleged interrogation exercise.  There have been several other abuse cases that continue to haunt the Guyana Police Force. Almost daily, the Force is faced with accusations of abuses and torture of suspects while in custody.

U.S Ambassador to Guyana Brent Hardt, told the graduation ceremony the programme marked another signal of the common commitment under the Caribbean Basin Security Initiative (CBSI) to work together to combat transnational criminal activity.

“The FBI training courses provided this week represent a continuation of our very successful training efforts over the past year through which Guyanese officers traveled to the Trinidad and Tobago Police Academy to attend courses taught by both the FBI and by FBI-trained Trinidadian instructors.  In fact, Guyanese officers were in Trinidad as recently as last week.  The Interview and Interrogation Course and the Basic Criminal Investigation Courses presented here form the core foundation of good detective work”, the Ambassador noted.

Mr. Hardt added that partnerships through training “helps us create relationships that, in turn, make it possible to pursue investigations across borders, eliminating the ability of criminal elements to use border and boundaries to outmaneuver national law enforcement agencies”.

Notably absent from the Graduation Ceremony were Minister of Home Affairs Clement Rohee and Police Commissioner Seelall Persaud. No reasons were given for their absence.

The Guyana Police Force has benefited from several programmes under the CBSI. A number of other initiatives are expected under the regional initiative that enjoys support from the U.S government.