To become an EITI implementing country, a country must complete five sign-up steps. The steps relate to the commitment of the government, company and civil society engagement, the establishment of a multi-stakeholder group and agreement on an EITI work plan. With oil production on the horizon and increased gold production taking place, Guyana is aiming to become a member of the Extractive Industries Transparency Initiative (EITI) by the end of 2017 and as part of that move,  the Guyana Extractive Industries Transparency Initiative – Multi-Stakeholder Group (G-EITI MSG) was launched today.

To become an EITI implementing country, a country must complete five sign-up steps. The steps relate to the commitment of the government, company and civil society engagement, the establishment of a multi-stakeholder group and agreement on an EITI work plan.

When a country has completed the sign-up steps, the government, with the support of the multi-stakeholder group (a coalition of representatives from government, companies and civil society), an EITI Candidature Application is submitted.

The launch of the G-EITI MSG seeks to provide consolidated information on the country’s extractive sector in accordance with international standards.

Importantly, it also aims to reconcile key resource revenue follows paid by companies with those received by Government in addition to assessing how those revenues are expended by Government on behalf of the people.

The group is a primary body responsible for overseeing and coordinating a successful and effective implementation of the global EITI standards in Guyana. The body is expect to provide and establish a framework to promote collaboration and consensus building in implementing the extractive industries transparency initiative.

Minister of Natural Resources, Raphael Trotman noted that the grouping is a true demonstration of inclusivity and transparency since all stakeholders are represented at the table.

Those include government, civil society and industry. 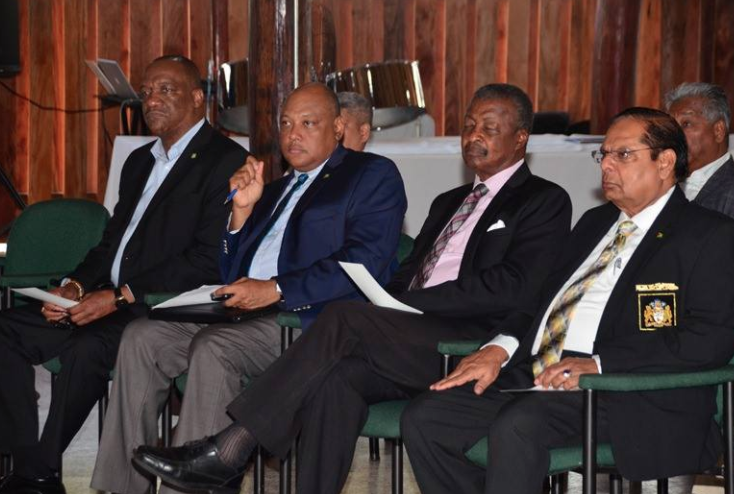 “The Government has approached, the EITI process with a commitment to transparency and openness as well as a recognition, acceptance and a deliberate effort to foster the truth that the resources of Guyana belongs to every Guyanese in equal measure”, Minister Trotman stated.

The initiative has the potential to deliver significant benefits to the Guyanese economy through increased accountability and transparency, translating into more informed public policy debates and guidance on managing the country’s resource endowments, Minister added.

There is a secretariat to be established and already a National Coordinator and Deputy Coordinator have been appointment. The hiring of additional staff is on going with an operationalized secretariat set for the mid of this year.

Curtis Bernard, representative of Civil Society explained that the EITI is a proven way of achieving transparency.

Prime Minister Moses Nagamootoo feels the establishment of the body is one way to ensure that Guyana doesn’t fall prey to the “Dutch disease”.

In the coming weeks, the Ministry of Natural Resource will be embarking on an outreach programme to inform and engage the public on matters like these and other similar nature.