More being done to fight drug trafficking in Guyana -US Ambassador

Speaking to members of the media on Monday, United States Ambassador to Guyana, Perry Holloway believes the government and law enforcement agencies are doing more to fight crime and drug trafficking despite some lapses and lack of resources. The Guyana Government and its Drugs Enforcement Agencies are being commended for their fight against the narco-trade despite the recent escape of self-confessed Drug Lord, Barry Dataram.

Speaking to members of the media on Monday, United States Ambassador to Guyana, Perry Holloway believes the government and law enforcement agencies are doing more to fight crime and drug trafficking despite some lapses and lack of resources.

Holloway’s comments come even as the political opposition said the government must accept blame for Dataram’s escape.

The opposition People’s Progressive Party considers it a failure of the institutional arrangements to fight drug trafficking in Guyana, including the U.S Drug Enforcement Administration, that Dataram was allowed to flee the country while his trial was ongoing.

But Ambassador Holloway has clarified that the DEA office does not make busts or prosecute persons charged with drug related offences.

He said the sharing of information between the Customs Anti-Narcotic Unit (CANU) and law enforcement agencies have increased and are lending to more busts.

The U.S Ambassador said the office staff have tripled in size since the DEA came here February and he expects greater sharing of information going forward.

He explained that the training being provided to local law enforcement officers has also increased.

“I look forward to many good things in next six months… more good news,” he added. 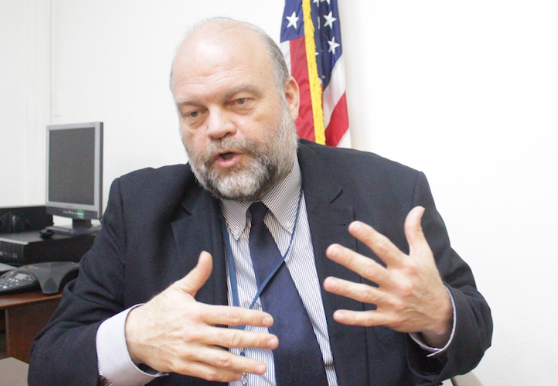 Ambassador Holloway reminded that Guyana is a large country and he believes the government has taken steps and is sincere about wanting to see crime reduced.

“But the bad guys well-funded and it’s like every time you take three steps forward you take two steps back… they don’t play by the rules,” he reasoned.

Holloway also commended the government new national drug policy and said he expects better news in the area of fighting crime and the narco-trade in coming months. (Kurt Campbell)