“Apologize now” was the call coming from protesters outside the privately-operated Mae’s School, as they directed that call to the School’s administration for a decision last week to ask the parent of a young boy to not have him in school bare-chested as part of his indigenous wear for culture day.

The boy’s mother, Karen Small was among the protesters and said she was told directly by the Headmistress of the School that the child could not enter the premises unless he was covered up.

She admitted that she did comply with the request but became upset later in the day when she picked up her son and he complained of being teased in school by the other children over his Amerindian attire.

The mother said she believes the school needs to issue an immediate apology to her son, but more importantly, she wants her son’s ordeal to be the start of the end of discrimination that many Indigenous people encounter on a daily basis.

“He came home and he said children told him that you stupid Amerindian boy, why didn’t you wear a vest or he was told that he is not in an indigenous environment so he shouldn’t dress like that.”

Small said other children were very excited to see her son dressed the way he was, but she was terribly disappointed when the Headmistress refused him entry.

Representatives of the Amerindian People’s Association and the National Toshaos Council joined the protest outside the school this morning.

Amerindian rights Advocate Joel Fredericks said under the Constitution of Guyana, all six races are to be respected for their culture. 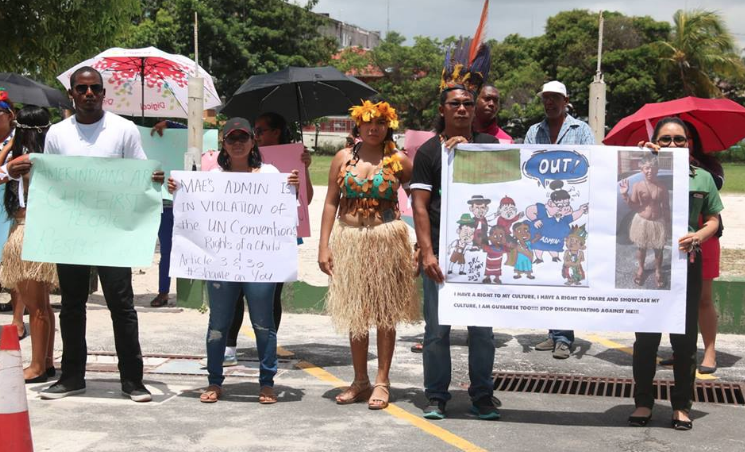 “We are the first peoples of Guyana and we are proud of our culture and this is what we teach our children and they are also proud. The incident here I am not in support and I condemn it.”

Fredericks believes the move is in stark contract to the Government’s policy on Social Cohesion and registered his strong concern of the incident.

Government Communications Officer and rights activist, Natasha Smith, said she orchestrated the protest because she believes the time is now for discrimination against Amerindian people to come to an end.  She noted that while many of the other races are allowed to display their own cultures proudly, whenever Amerindians do so, they are teased, tormented or laughed at.

She said over the years, she has faced many forms of discrimination, which she is convinced, were related to her race.

Another rights activist, Michael McGarrel, also raised his concern about the school’s decision not to allow the 9-year-old boy into the school in his Amerindian attire. He said while it is understandable that the school may have its own rules, those rules should not affect the rights of anyone else, including children and Indigenous people.

The refusal to allow the child into the school’s premises also got the attention of persons within the government with Indigenous People’s Affairs Minister, Valerie Garrido-Lowe urging the school to publicly apologize. 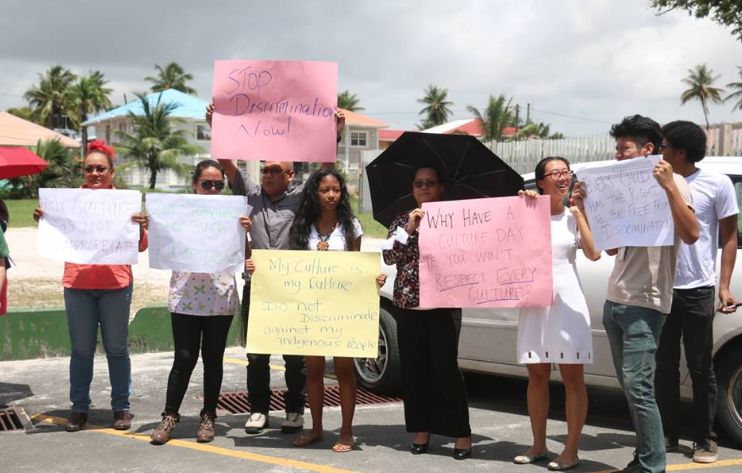 The gates to the school remained tightly closed today and no other employee apart from two female guards at the gate were in sight.

When NewsSource asked to speak with the Head Teacher, we were told that the administration had “no comment” to offer.

Other parents who were there to uplift their children at the same time looked on but would not offer any comments either on the issue.  (by Kurt Campbell)