Police kick down doors in search of robbers at Linden Police ranks at Linden arrested over 10 young men at Linden on Monday as they widened a search for two men who attacked and robbed the Wismar Post Office of millions of dollars in pension money earlier in the day. The police guard who was on duty was beaten and relieved of his weapon during the robbery.

Residents at Wismar complained to News Source about van loads of police officers arriving at a number of homes in the area and kicking down the doors to gain access into the houses. One woman said her house was ransacked and the police arrested her husband who had not even left the house for the day. 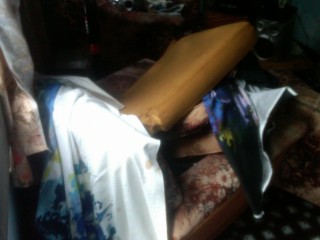 The woman who asked for identity not to be revealed said the policemen barged into her house after kicking down the front door and “terrorized” them by pointing guns at them as they asked questions about the robbery which she said she knew nothing about and her husband was “just as clueless”.

A young man in the Silvertown area said he was in his house this afternoon when Police arrived at his neighbour’s house. He said the Police kicked down the door of his neighbour’s house, handcuffed the man and began to search the house claiming that they were looking for guns and ammunition and a large sum of money.

“The police ask the man if he want he skin burn today or if he will cooperate, and the frightened young man decided to just turn himself over to them to avoid any confrontation. They sped off with him and that was it, no one has heard from him since and that was since 2 this afternoon,” the neighbour said.

Residents in a section of Amelia’s Ward on the Mackenzie shore also complained about similar action by the police. According to one resident in that area, the situation was chaotic as the Police patrols “appeared to be arresting any and everybody. Even a young man was pulled out of his bed in Amelia’s Ward and taken to the station with no questions asked”.

Two armed men pounced on the Wismar Post Office just after 8 o’ clock on Monday morning, making off with millions of dollars in cash that should have been used to pay Government pensioners from Tuesday morning and the weapon that belonged to the one policeman who was on duty at the Post Office.

The Wismar Post Office came under a similar attack three years ago. Investigations at Linden are ongoing.