In a statement, The United States Embassy said it is in receipt of the recent allegations made by the Peoples Progressive Party/Civic (PPP/C) and has looked into the claims. "Nothing contained therein changes our baseline assessment of the electoral process." The U.S. Embassy in Georgetown on Thursday said it stands by its assessment of Guyana’s electoral process being free, fair, and credible.

In a statement, The United States Embassy said it is in receipt of the recent allegations made by the Peoples Progressive Party/Civic (PPP/C) and has looked into the claims.

“Nothing contained therein changes our baseline assessment of the electoral process.”

According to the Embassy, “on our observations of the polling, counting, and tabulation process and the conclusions reached by other international observer missions, we continue to assess that the election process was free and fair. We remain confident in the Guyana Elections Commission’s ability to deliver credible results that accurately reflect the way votes were cast by the Guyanese people on May 11.”

The embassy urged the Guyana Elections Commission to continue with its important tabulation work and to provide verified results at the earliest possible opportunity. 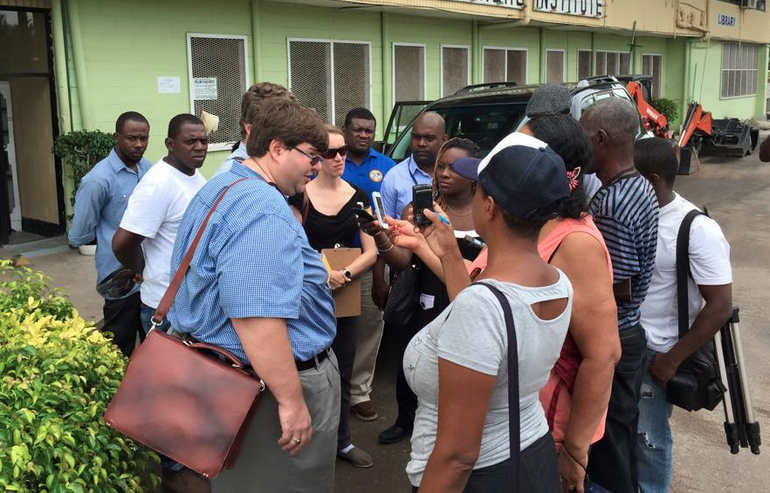 American, British and Canadian envoys during their visit to Linden on Elections Day.

“The United States Embassy understands the Guyanese people’s desire to see the final results of these elections. It is important, however, to provide the Guyana Elections Commission the time and space to conclude its work‎. We urge the people of Guyana to continue to exercise patience”, the release added.

The United States Embassy is calling on all political leaders to adhere to the Political Party ‎Code of Conduct, which specifically proscribes public criticism of the Guyana Elections Commission or interference with its work.

“We expect all parties to respect the final results of these elections.”

The People’s Progressive Party which is facing its first defeat in elections since 1992 dispatched a list of complaints to the diplomatic community as GECOM gets ready to announce the final results which will likely show a big victory for the APNU+AFC coalition.

The complaints were drafted by longtime PPP member, Dr. Roger Luncheon and dispatched to senior party members to leak to the media as it was being sent to the diplomatic community.

The APNU+AFC wants GECOM to declare the final results and allow the “new government” to move forward.