CARICOM SG to UG Grads: Do Not Forsake the Region The graduating class of 2014 from the University of Guyana was urged not to forsake the Caribbean region by Caricom Secretary General, Irwin La Rocque. Delivering the feature address, the region’s top ambassador congratulated them and said that the constraints facing those who graduate from tertiary institutions are well known.

They have now joined the less than 15% of the region’s citizens who possess a university education, the Caricom head said, as he asked that those in attendance to briefly pause to remember the contribution of those who taught them previously, along with their parents who supported them in the journey.

Addressing the graduates directly, he said they should follow the mission of their Alma Mata, “To discover, generate, disseminate, and apply knowledge of the highest standard for the service of the community, the nation, and of all mankind, within an atmosphere of academic freedom that allows for free and critical enquiry”. 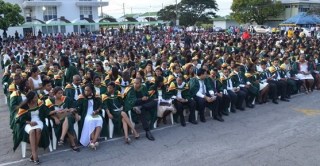 The hope was expressed by the Caricom head that the community that the graduates choose to serve is within the Caribbean. He spoke of the advances of the global economy and urged them to apply for the Caricom skills certificate to serve in any of the 12 countries that are part of the Caribbean Single Market and Economy (CSME). With some 40 such certificates already issued, he expressed the hope that by next year, potential graduates would be able to apply online for same. “This is a good example of what our community, your community is doing. Providing opportunity for skilled citizens to advance their own career and pursue their personal goals while at the same time, contributing to the development of our region”.

The newly qualified students were reminded to read constantly and voraciously, in what was described as the “book of life and the book of other people” and not just the books on the library shelves.

Giving the Valedictorian address was winner of the President’s medal, Joel Joseph. After thanking his parents, better half and lecturers, he recounted some of his experiences at the University that had the crowd applauding heartily. He quoted the inventor and painter Michelangelo, who said, “The greater danger for most of us lies not in setting our aim too high and falling short, but setting our aim too low and achieving our mark”.  Noting that Guyana loses around 80% of its UG graduates to other nations, the Linden resident said that corporate Guyana, Government and students have to work together to solve this problem. He called for what he described as various incentives and “other sweeteners” to pursue skilled persons to remain to serve and develop their country.

Graduates also need to adopt a more patriotic and nationalistic approach to serving their country. He added that it is direction of duty for all stakeholders not to accept collective responsibility for Guyana’s developmental trajectory.

This year marked the University of Guyana’s 48th Convocation ceremony.