At a Monday morning press briefing, Minister Jordan trashed claims of an unwell state of affairs with regards to the country's finances and major industries. He explained that he stands by statistics on the performance of the economy and said those statistics should not be doubted or challenged. Guyana’s Minister of Finance, Winston Jordan, is maintaining that the country’s economy is “in good shape” as  he continues to fight off suggestions from private sector bodies and the political opposition of the economy being sluggish.

At a Monday morning press briefing, Minister Jordan trashed claims of an unwell state of affairs with regards to the country’s finances and major industries. He explained that he stands by statistics on the performance of the economy and said those statistics should not be doubted or challenged.

“It is not a dooms scenario, we are doing reasonably well and we will continue to do well with good management of the economy,” he said.

Jordan reminded of pronouncements by the International Monetary Fund (IMF) during its recent visit to the country.

“The IMF was here and said generally the economy is in good shape. It grew by 3% last year and is projected to grow by at least 4% this year. This clearly cannot be an economy that is on the decline and sluggish,” Jordan argued.

The Minister held onto to his reasoning that the reduction in drug trade was partly responsible for reduction in free spending.

He said there were several studies done which showed that an estimated 50% of the economy was controlled by the informal sectors, including the drug trade and smuggling.

Although he has not seen the comparative figures between the informal sectors and the economy but the Governor did not disagree with the Minister’s reasoning.

Dr. Ganga said the financial situation in the country is “quite healthy” and claimed that there were sound macro economic indicators and good confidence. 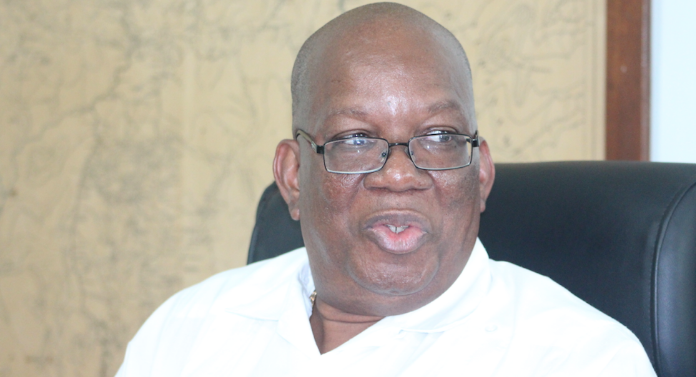 Reflecting on the first quarter, the Bank of Guyana Governor said there was a mixed performance of the major sectors with the el nino conditions affecting agriculture.

He said there were outputs in the mining and manufacturing sectors. Inflation has been constrained with a 0.5% deflation during the first quarter. Dr. Ganga said too that the current account has moved from a deficit US$73.4 million to US$51.% million while the capital account has moved from a deficit of US$51.5 million to US$14.8 million. There was a marginal decline in external debt coupled with a marginal increase in domestic debt.

Dr. Ganga said there was some amount of “flat movement” within the financial sector but pointed to a 5% increase in credit to the private sector.

Finance Minister Jordan reminded of several incentives offered by the government over the last year including increases in old age pensions and the removal of the Value Added Tax (VAT) on several items.

He said this was done at a time when Guyana was experiencing troubles both internally and externally and recalled the diversions or large sums of finances and other resources to the ailing sugar industry, troubled rice industry and to deal with Venezuela’s spurious claims to the Essequibo region.

He said within one year, the APNU+AFC government has been able to reverse a declining trend of economic growth. “When we came in despite all the issues we faced, we were able to do a range of things and here I’m not knocking any news papers, but if all we can find in a one year review are three or four of the usually suspects giving their view then we would always believe that nothing is happening, those suspects see nothing happening anyhow,” he added.

Those efforts, he said,  are starting to pay off and Guyana is poised to secure loans for the 2016/2017 period, particularly in the area of agricultural diversification, infrastructure development and business.