The Feb. 16 operation was revealed Monday when the cocaine bales where offloaded at Coast Guard Sector San Juan, Puerto Rico, two days after four Guyanese men apprehended in the seizure were delivered to federal law enforcement in St. Croix. A nighttime interception of a fishing vessel in international waters yielded 4.2 tons of cocaine with an estimated wholesale value of US$125 million — the biggest maritime seizure in the Atlantic since 1999, Coast Guard officials said.

The Feb. 16 operation was revealed Monday when the cocaine bales where offloaded at Coast Guard Sector San Juan, Puerto Rico, two days after four Guyanese men apprehended in the seizure were delivered to federal law enforcement in St. Croix.

The smugglers who were taken off a 70’ fishing boat face prosecution by the U.S. Attorney’s Office for the Virgin Islands. 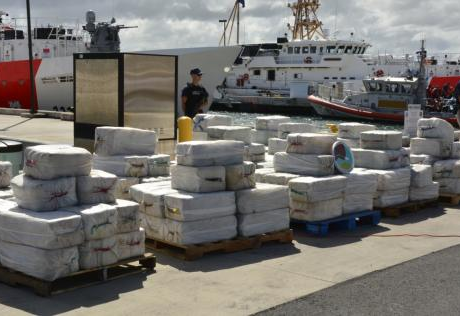 A Trinidad and Tobago SPa (Standard Patrol) class coast guard cutter based out of Staubles Bay, Trinidad, was on a joint patrol with the Napier and provided safety and escort assistance at the scene. The Napier took the Lady Michelle under tow until relieved by the Vigilant, a 210’x34’x10’6” medium endurance cutter based out of Port Canaveral, Fla. The Vigilant towed the fishing vessel to its port of registry, the island of St. Vincent, and transferred custody to the St. Vincent coast guard.

The operation was the latest result of multi-agency and international law enforcement efforts led by the U.S. Drug Enforcement Administration (DEA) office on St. Croix, and assisted by DEA Barbados office, and the Caribbean Corridor Strike Force and the British National Crime Agency (NCA).

“The excellent coordination between the U.S. Coast Guard, and international law enforcement agencies prevented this major drug shipment from reaching our communities,” said Capt. Robert W. Warren, Coast Guard Sector San Juan commander, in announcing the operation.  “We appreciate our continued partnerships with the Trinidad and Tobago Coast Guard and St. Vincent Coast Guard. Our collective efforts are working to secure our region’s maritime borders and protect our citizens from this threat.”

“As the cocaine flow from South America continues to increase, law enforcement partners in the Eastern Caribbean Region have to increase our collaborative efforts in order to effectively respond to the threat,” said James Doby, DEA assistant special agent in charge for the agency’s Caribbean division.