GAWU disappointed in Jagdeo’s criticism of meeting with Government

Over the weekend, the Opposition Leader dismissed the meeting between GAWU and the government as nothing more than a public relations effort by the government. The Guyana Agriculture and General Workers Union has expressed some disappointment in statements made by the Opposition Leader about the union’s recent meeting with the government.

Over the weekend, the Opposition Leader dismissed the meeting between GAWU and the government as nothing more than a public relations effort by the government.

But in a statement yesterday, GAWU said that while it recognizes and respects Mr Jagdeo’s right to an opinion, it was disappointing that from all appearances, he was not armed with or did not pay serious attention to statements issued by GAWU after the meeting with government.

The union said, had he done so, he would have reached a different conclusion about the meeting and GAWU’s position.

“The Opposition Leader questioned what “common ground” the sugar unions and the Government reached. It seems maybe Mr Jagdeo misunderstood the conclusion of the meeting, as both GAWU and NAACIE undertook to work with the Government in reaching “common ground”. We did not advise that “common ground” was reached. In fact, the GAWU statement pointedly said:- “[o]ur Unions [GAWU and NAACIE] recognized the importance of working along with the Administration in finding an acceptable solution to the crisis which has now beset scores of communities and thousands of Guyanese”. It is in this context that our Union expressed our cooperation. Moreover, the Opposition Leader who was President for over a decade should know better than most that issues of this nature and magnitude cannot be resolved in a fully comprehensive way at a single meeting though one would wish that could happen”, GAWU noted.

The Union said it is indeed surprised by the Opposition Leader’s statements as some of the points he is now raising, were raised by the Union with the government during the meeting.

According to GAWU, “In our presentation, we reiterated our strongly held position that the decision to shutter estates was incorrect and that there were several workable ideas to secure the sugar industry and urged the Administration to re-look and re-think its decision. In addition, we told the Government that we disagreed with privatization but said that if this is the Administration’s intention we called for those arrangements to be transparent. We went on and urged that maximum value to be secured for the assets and, therefore, in keeping with such a stance the estates should be re-opened, the workers re-employed and they made into going concerns before any sale takes place. Additionally, we insisted that the Government ensure that certain critical working conditions and rights are respected if there will be new owners.”

The Union’s statement chided Jagdeo for not informing himself of the Union’s position after the meeting before going before the national media to criticise the meeting. 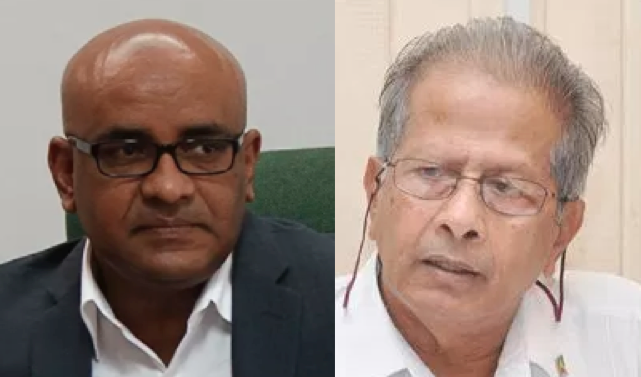 “These matters were explained in more detail in our press statement but it is unfortunate that Mr Jagdeo maybe didn’t have an opportunity to examine the copy that was sent to him electronically. Certainly, had the Opposition Leader required more information he could have requested a copy of our presentation which would have better edified him on the matters we raised, and provided him an opportunity for any further clarification”, it said.

The Union maintains that it is incumbent on the Union to engage the Administration in all possible avenues in order to further the workers’ interests and rights.

“Our Union’s view is that in the difficult conditions workers are now confronting we should not close our mind, ears and eyes to any sort of engagement, for doing otherwise, in this instance, would certainly not be pleasing to the beleaguered, jobless, workers.”

During his Saturday press conference, the Opposition Leader also appeared to take a swipe at the GAWU President Komal Chand by pointing out that he is happy the union has young members to move it forward.

According to GAWU “it is heartening that Mr Jagdeo recognizes the depth of our leadership who are involved together with our more experienced comrades to consider collectively our Union’s approach and tactics. At this time, the GAWU believes that it should use every arena and leave no stone unturned to further the struggle of the sugar workers, and engagement with the Government is one such plank”.

GAWU said it is no stranger to engaging Government on workers matters and in the union’s years of association with the sugar industry, it has engaged every Head of State from the late President L.F.S. Burnham.

The Government has said it is committed to work along with the union and other stakeholders to see how best it could cushion the effects of the issues facing the sugar industry in Guyana, that havr led to restructuring and thousands of workers being laid off.