Government has no problem with torture cops being promoted -Luncheon Secretary to the Cabinet Dr. Roger Luncheon on Wednesday said Cabinet members are satisfied with the explanation given by the Police Service Commission (PSC) for the recent promotion of two policemen who were charged with the November 2009 torture of a teenage boy at the Leonora Police Station.

Dr. Luncheon told reporters this morning that consequent to the explanation given, there were no objections to the promotion from Cabinet members.

When the Guyana Police Force (GPF) made public the list of promotions earlier this month, it created unease among the citizenry who have long criticised the GPF for promoting ranks charged with and in some cases accused of wrong doings.

In November 2009, the duo had appeared in court and were charged with burning the genitals of a 15-year-old boy with intent to maim, disfigure, disable or cause him grievous bodily harm. 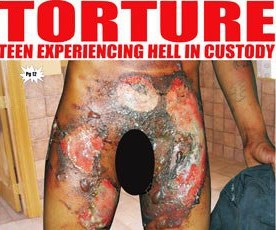 The criminal case against them was subsequently dismissed after the youth did not attend court to offer evidence. They were still found culpable by an internal police investigation and in a civil matter, a High Court Judge also found them responsible for the torture while ruling that the young man be compensated by the state for the torture.

But according to Dr. Luncheon the news of this promotion initially created unease too among Cabinet members.

“The explanation provided to Cabinet clarified the decision of the Police Service Commission that having satisfied itself that the matter had been concluded… the two policemen were no longer subjected to discipline or legal challenge,” Dr. Luncheon said.

The Police Service Commission in defending the promotion of the torture cops, said the men had exemplary service to the police force although they were charged and found to be culpable for torturing the teen.

Luncheon said there was simply no need to deny the policemen a promotion as a means of additional disciplinary measures.