It was noted that at the meeting, Prime Minister Nagamootoo made a detailed presentation after listening to dozens of educators, students and parents. He told the audience that the ministerial team will take the concerns and views expressed to Cabinet for consideration and an announcement will be made subsequently. Expressed intention to have Value Added Tax (VAT) paid on private school fees will be subject to further review by the Cabinet when that body meets next Tuesday.

This was according to the Government in a release today, following a meeting between private school stakeholders and government officials including the Prime Minister and Minister of Education. That meeting was held at the National Cultural Centre.

According to the statement, the government, through Prime Minister Moses Nagamootoo has committed to reviewing VAT on private school fees at the next meeting of Cabinet.

It was noted that at the meeting, Prime Minister Nagamootoo made a detailed presentation after listening to dozens of educators, students and parents. He told the audience that the ministerial team will take the concerns and views expressed to Cabinet for consideration and an announcement will be made subsequently.

The statement highlighted that the Prime Minister specified that while he can give clear assurance that the issue will be reconsidered for the 2018 budget, he could not make a unilateral decision, outside of Cabinet, for the VAT to be rescinded at this time. 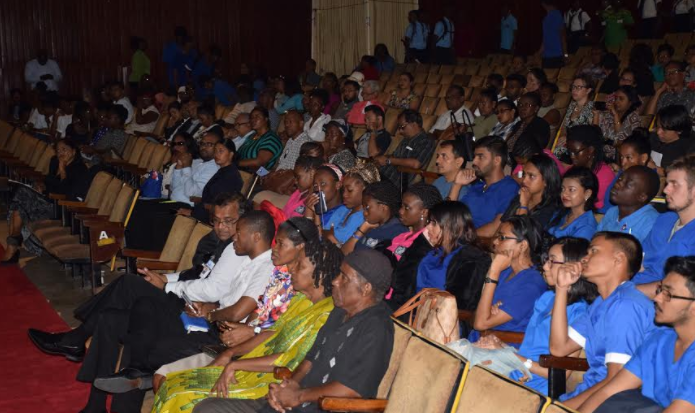 He further explained that the measure was not introduced in any way to place a burden on parents and students, but that with the reduction of the VAT rate from 16% to 14% there was a reduction of some $10 billion in revenue. As such, the PM pointed out that the government had to examine ways in which to make up for this shortfall.

In his deliberation, Prime Minister Nagamootoo also urged all private school operators to be registered with the Ministry of Education and for them to make efforts to become accountable and compliant with the laws, regulations and standards.

Meanwhile, Minister of Education Dr. Rupert Roopnarine, reiterated that the matter remains under consideration by Cabinet.

Dr. Roopnarine highlighted government’s commitment towards education by referencing the 2017 budgetary allocation of $43.1 billion to the sector. This amount, he added, represented 17.2% of the country’s national budget.

The Education Minister noted too that the sector received the largest single budget allocation for 2017. He also pointed out that significant sums were being expended on the school feeding and school uniform programmes along with construction, expansion and renovation of schools, dormitories and other buildings.

Like the Prime Minister, Dr. Roopnarine noted that while the private education sector provides support to the public education sector, the large number of unregistered private schools needs to be addressed and regularized.