(NY Post) The kingpin of a massive motorcycle theft ring was convicted of enterprise corruption in Manhattan on Thursday.

Guyanese Steve Dow, 31, who went by the nickname “Jersey Dred,” now faces anywhere from one to 25 years in prison for his role in the ring, which officials said viewed the city’s streets as an outdoor, motorcycle showroom and was responsible for half of all cycle thefts here.

Ring members would drive around in vans — themselves often stolen — into which they’d load flashy motorcycles in a matter of seconds. The bikes — some 300 stolen a year, according to investigators — would be sold intact, or dismantled and shipped to buyers in the Caribbean and Senegal.

The ring was busted through a 17-month, joint NYPD and Manhattan DA investigation in which undercover cops purchased 63 bikes and 17 guns, including four assault weapons.

Omar Thomas, 25, was acquitted after NYPD staff accidentally deleted two surveillance tapes which prosecutors had said showed him selling a total of four bikes to under covers.

Damian Jones, 31, was also convicted of enterprise corruption and faces a higher possible minimum sentence, 4 and a half to 9 years, because of his previous convictions for assault and kidnapping. 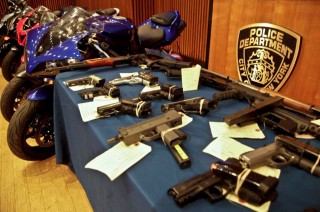 Trumaine Francis, 28, was acquitted of enterprise corruption but was convicted of criminal possession of stolen property and grand larceny.

“Each of the defendants played different, but critical roles in a highly organized operation that systematically stole expensive motorcycles off the streets of Manhattan,” District Attorney Cyrus Vance, Jr. said after the verdict.

To date, 25 defendants charged in connection with the ring have been convicted, including fellow ringleaders Tiwane Paul, who is serving 7 and a half years to nine years prison and Selwyn Mills, who is serving 5 to 9 years.