Man and wife arrested after approaching Benschop for “Hit-men” A Parika man and his wife have been taken into police custody after they approached Political activist Mark Benschop to hire “hit men”.

Benschop who operates a foundation in New Market Street, Georgetown said the couple came to his building on three occasions but it wasn’t until they came the second time, that their true intent began to unravel.

According to Benschop, when the visually impaired man and his wife came into his foundation, the man began to vent about being badly treated by the Neighbourhood Democratic Council in the Parika area and being owed money for a plot of land in the same community. “At first, there was nothing strange about their complaints since folks come here often to vent their problems”, Benschop said.

But the activist became worried after the man started to enquire about hiring two persons to kill three men in the same Parika area. He identified himself only as “Lochan” and named an NDC official as one of the persons he wanted dead. 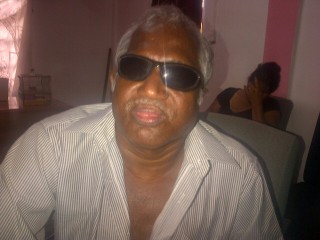 Benschop captured the entire complaint and request on video. News Source was shown the video recording and the man could be seen and heard making the request, telling Benschop that he was willing to pay for the killing of the persons he named and would offer details about their whereabouts.

Throughout the man’s conversation with Benschop, his wife sat quietly in the background. He could be heard saying that he was willing to pay $200,000 for the job. The activist said he became very concerned and contacted the police and requested that under cover police officers be sent across to his office. Benschop said the three policemen arrived in “plain clothes” and pretended to be the “hit men” the man wanted to hire.

“The Police came and he recounted the same story to them, making the request again and offering them $300,000 for the hit job”, Benschop told News Source.

The Parika couple was eventually allowed to leave Benschop’s office but were being tracked by the Police.  Reports suggest that on Friday afternoon they were both arrested and taken into custody.

Speaking to News Source just after receiving word of the arrest, Mark Benschop said he does not know why complete strangers would go to him seeking persons to execute other people. He said he asked “Lochan” several times who sent him, while the man dodged answering that question, he could be heard on the recording saying that he was told that Benschop could be the person to “help him out”.

Mark Benschop who is no stranger to controversy operates an online radio station that is very critical of political figures in Guyana. Over the years, he has also held a number of widespread protests against the government. He spent 5 years in jail on a treason charged before being pardoned by former President Bharrat Jagdeo.

He said he can’t say who may have been behind the move to send the people to him to find hit men but he is convinced it may all have been a “set up”. For that reason he said, he knew it was the right thing to involve the Police.