The Guyana Forensic Science Laboratory which is intended to enhance the investigative capacity of the local law enforcement in crime and the prosecution of offenders, by provide quality, scientific evidence and expert testimony has been commissioned.

The construction and outfitting of the Forensic Science Laboratory came under the Citizen Security Programme, which concluded on June 30 and was implemented under the Ministry of Home Affairs through a loan agreement between the Government of Guyana and the Inter-American Development Bank.

The objectives of the Citizen Security Programme was to enhance the citizens security by contributing to the reduction of crime and violence, specially the programme targets the area to strengthen the capacity of Ministry of Home Affairs and the Guyana Police Force  and also to build safer community.

Secretary to the Defence Board and Cabinet Secretary Dr. Roger Luncheon commissioned the new facility. 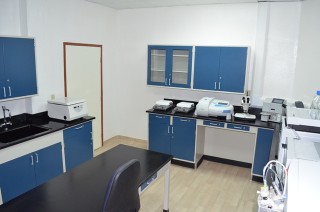 “For me it is an occasion, this evening that heralds, further evidence of national building that indeed we can generate a convergence of interest on the local scene, regionally internationally, both bi-lateral and multi-lateral to work in the interest of Guyana in establishing another national institution,” Dr. Roger Luncheon said.

He said “make no mistake, the Forensic Science Laboratory is an addition and an addition whose time has come but an addition nonetheless to the inventory of national institutions… and as we leave here today and we recall participating in this event, I think more than anything else is the creation of another national institution that I would like to take with you,” he said.

He further pointed out that after many years of encouragement, commitment and preparation that the country collectively would have today, given birth to its latest of national institution, whilst noting the context of this latest national creation. Dr. Luncheon noted that the birth of the Forensic Science Laboratory would have been in the 2006 to 2011 period.

Meanwhile, Minister of Home Affairs Clement Rohee promised that the laboratory will not be a “white elephant” noting that the Ministry has been taking steps in addressing this and have been working with the Director in arriving at not only the clientele but also towards formulating a business plan for the laboratory in order to ensure that at every stage of its development, it is active and “taking business.”

The laboratory is retrofitted with state of the art equipment and highly specialised evidence recording system that would keep track of all evidence submitted for analysis.

It will specialise in analysis of toxic substances, narcotic drugs, pharmaceutical drugs, alcohol, forge document and biological fluids. Additionally base on a mandate given by President Donald Ramotar and the cabinet the ministry of Home Affairs has been tasked with the responsibility of introducing some element of DNA testing at the laboratory.

The IDB representative in Guyana noted that this was the first forensic laboratory that the IDB would have supported in the Caribbean. She said that the capacity and equipment being installed would have the potential to be utilised by neighbouring countries that are currently accessing such services through foreign providers.

The first floor has accommodation to support the Forensic Science Laboratory four department; chemistry; toxicology; document and evidence trace. Each of the four departments has six laboratories and an instrument room. The facility also consists of a single floor service building totalling 26,000square feet.