The President noted that Guyana’s development demands a proficient, professional Public Service and public servants are essential to the country’s administration since they exert direct and daily influence on the lives of Guyanese through various official agencies, boards, commissions, departments and ministries.

President David Granger, today, administered the Oath of office to the new members of the Public Service Commission (PSC).

During the ceremony at State House, the President reaffirmed his administration’s respect for the independence and the commitment to support the work of the Commission, as he noted that it is essential to maintaining public trust in government.

“The Constitution of the Cooperative Republic of Guyana (at Article 201 (1)) vests the Public Service Commission with “… the power to make appointments to public offices and to remove and to exercise disciplinary control over persons holding or acting in such offices…” The Public Service Commission promotes a professional Public Service by ensuring that its appointments are based on the principle of merit rather than political patronage and that disciplinary action and removals, when necessary, are just.  The Commission can enhance the professionalism of the Public Service by appointing public servants who evince the qualities of impartiality, integrity and intelligence,” he said.

The President noted that Guyana’s development demands a proficient, professional Public Service and public servants are essential to the country’s administration since they exert direct and daily influence on the lives of Guyanese through various official agencies, boards, commissions, departments and ministries.

“Citizens’ access to public services – such as public education, public health, public infrastructure, public security, public telecommunications and social protection, for example – requires the existence of an impartial Public Service. Such a Service would be committed to implementing the policies and programmes of the Executive and to ensuring that the delivery of services to all Guyanese continues regardless of the political party in office. The Public Service serves the public good. It ensures the efficiency and efficacy of the delivery of public services. Public servants are responsible for advising and assisting ministers of the Government; implementing government programmes and projects; delivering public services and executing public policy intended for the benefit of the people,” President Granger noted. 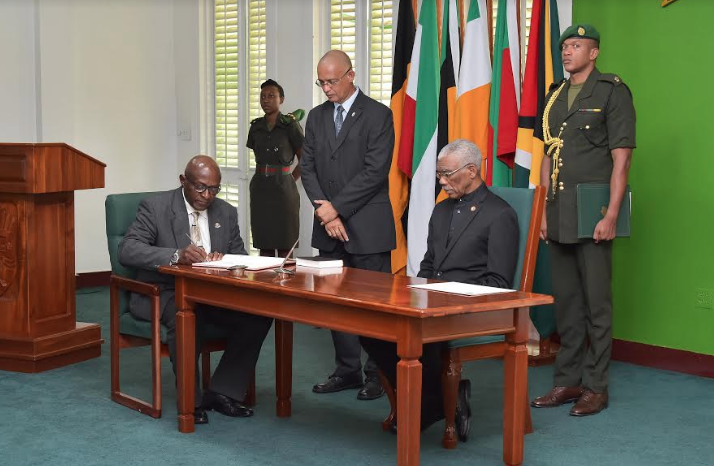 The members will serve for a period for three years as of today’s date. The Chair and Deputy Chair are elected by the members of the Commission.