Parents could head to the Google Play Store and search for “NGSA Practice Exams” to download the app. It will be available in the Apple store within the next week. With the continuing failing grade at common entrance mathematics by Guyanese students, the STEM Guyana (Science Technology Engineering Math) Project has launched a new mobile app that it hopes will assist in improving the performances of the children.

The mobile Math App was created to help the more than 14,000 local children who will be take the Grade 6 examinations annually.

It will be available in the App stores for both Android and IOS devices for free download, but it is being rolled out in four phases.

Parents could head to the Google Play Store and search for “NGSA Practice Exams” to download the app. It will be available in the Apple store within the next week.

It has a databank of Old grade six examinations from the period 2010-2016 and according explanatory videos for each question and gives the option to practice with the use of a tablet, phone or computer.

The development of the app had the inputs of two local teachers and a Math PHD teacher from Serbia. It also provides a marketplace for Books and school related items, school event calendars and National School Ranking based on the number of students who practice on the App.

Ms. Abrams told the small launching that “we are not under any illusion that this is a perfect system” but it can be impactful. 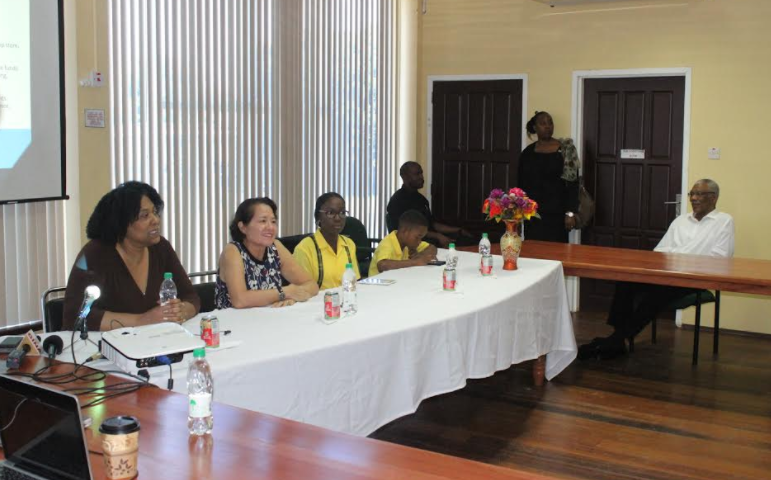 The App is also aimed at allowing children to have a greater appreciation for Mathematics since it relates to every aspect of life.

Financing for the App is expected to be garnered through donations and contributions in the diaspora and locally.

The project has received the support of the Office of the First Lady of Guyana and the Ministry of the Presidency.

During the launching, First Lady Sandra Granger expressed elation to be a part of the process adding that the App should make it easier for children to learn Mathematics. She noted too that, “I know my husband who also has an interest not only in education but also in STEM will be very happy, that we are trying to make another impact in the lives of our children through education and through technology”

The STEMGuyana is also receiving the support and full backing of the Ministry of Education through NCERD, which is responsible for the development of STEM Education.

STEM Education envisions working with NCERD to improve the functionality of the app, to test the outcomes, and to improve the distribution to students and classrooms across Guyana.

There are later plans to expand to other subject areas. The launch took place at the National Racquet Centre on Woolford Avenue in Georgetown on Monday. (by Handel Duncan)