Police still to be charged for Linden shooting deaths One year after three Linden protesters were gunned down by members of the Police Force’s Tactical Services Unit  during a protest in the bauxite town, charges are still to be laid against anyone for the deaths and the Police officers who were on duty and who fired shots at the protesters remain on the job.

It was on the evening of July 18, 2012 that Guyana was rocked with the news of the shooting death of the protesters. The three men, 18-year-old Ron Somerset, 46-year-old Allan Lewis and 24-year-old Shemroy Bouyea had been a part of a day long protest by hundreds of citizens in the town against proposals by the Government to increase the electricity rate in the community.

As night fell over the town on the day of protests and residents maintained a block of the Mackenzie/Wismar Bridge, the Tactical Services Unit opened fire with live rounds on the protesters. Screams of anguish echoed through the night as the bodies of the three men were found through the thick tear smoke and the confusion that reigned. Several other persons were shot to their bodies. The action of the Police Force led to weeks of protests in the community. Roads were blocked off and buildings were set on fire. 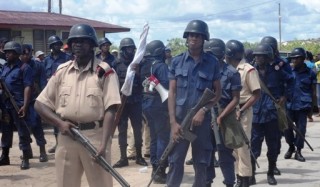 A Presidential Commission of Inquiry into the incident found the police responsible and culpable for the death of the three men.

“We believe that the police were responsible for the shooting to death of the three persons as well as the injuries caused to several other persons at Linden on July 18, 2012, as there is no evidence that anyone else had a firearm which was discharged,” the Commission’s report stated.

Still one year later, the Police Force claims that it is still investigating the case. On Wednesday at a Press Conference, Commissioner of Police Leroy Brumell told the media that the case remains an open one. He explained that the Force is still studying and discussing the findings of the Commission of Inquiry and is expected to very shortly make known its position on the issue.

Crime Chief and Deputy Police Commissioner Seelal Persaud said the Police Force commenced investigations into the death of the protesters “from day one and the force made presentations on the investigations at the inquiry”.

“It is open all the time, cases don’t close. We started the investigation and we have been asking since before the inquiry for persons who saw what occurred to come forward”, Police Commissioner Brumell added.

But during the Commission of Inquiry, dozens of Lindeners appeared before the Commission and offered evidence in the matter under oath. Legal experts have told News Source that if the Force is really interested in moving ahead with charges against the ranks responsible for the deaths, then it could turn to the statements and testimonies provided to the Commission by the eyewitnesses.

The Government of Guyana and the Guyana Police Force had come under intense pressure from citizens of the town and various groups to properly investigate the death of the Lindeners and ensure justice is served in the matter. Chairman of Region 10, Sharma Solomon has been pressing the case over the past years for the sacrifices of the “Linden martyrs” to never be forgotten. Justice for the three men, he said, is what is needed.

On Wednesday evening, scores of Lindeners gathered in the town for a candle light vigil. The Community has also agreed on a site for a monument to be erected in the memory of the three Linden protesters.