Mr. Granger told the World Leaders that Venezuela’s claim to Guyana’s territory has not diminished or been diverted and Guyana remains imperiled.

President Granger also issued a warning to World Leaders about the peace that may be at stake in the region because of the claim by Venezuela.

“Guyana warns the world, through this Assembly, that peace will be at stake in our region if justice does not become ascendant, not only within Venezuela, but also in respect to its border controversy with Guyana.”

He reminded that four UN Secretaries-General have been seized of the Venezuelan claims, and “the choice has become one between just and peaceful settlement in accordance with international law, and a Venezuelan posture of attrition that is increasingly more blustering and militaristic. In this matter, protraction is the enemy of resolution and the ally of sustained conflict.” 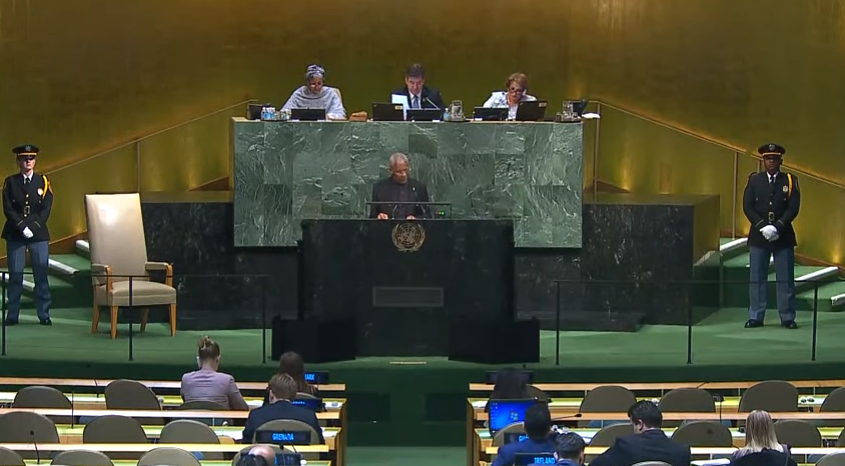 Guyana believes that it might be inching closer to a settlement in the border row. Former Secretary General of the United Nations, Ban Ki Moon and current Secretary General António Guterres have decided that under the 1966 Geneva Agreement, if by the end of the year 2017 significant progress has not been made toward arriving at a full agreement for the settlement of the controversy, the International Court of Justice will be the next means of peaceful settlement, unless Guyana and Venezuela jointly request otherwise.

The President said Guyana has been working assiduously with the Secretary General’s Personal Representative and “looks to the international community to ensure that Venezuela is not allowed to thwart the processes of judicial settlement which is the clear and agreed path to peace and justice.”

As 2017 draws to an end, there are already reports that Venezuela may want to seek an extension of the work of the UN Good Officer’s Process.  Guyana has indicated it may not want to head down that area and prefers a judicial settlement.