The Leader of the Alliance For Change Khemraj Ramjattan has come under criticism from many of his party’s supporters on social media and political observes over his decision to stay away from a joint opposition rally with A Partnership for National Unity.

While the Square of the Revolution rally was attended by the AFC Chairman Nigel Hughes and General Secretary David Patterson along with Members of Parliament Cathy Hughes, Valerie Garida Lowe and Trevor Williams, the absence of Ramjattan and Moses Nagamootoo was noticeable.

While Nagamootoo’s absence is being blamed on a “previously schedule social media town hall meeting”, Ramjattan has declared that his decision not to attend the meeting was a personal one and it was a decision that sought to avoid his presence at an APNU led rally being used as campaign material for “PPP propagandists”.

Writing on Facebook, Ramjattan said “the liberal democratic nature of the AFC allows a subjective decision to be made by leaders and members of this Party on particular issue of importance to them. It is a sort of conscience vote on the matter. I personally felt that knowing how it will be spun and twisted by the propagandists in the PPP, it would not be wise to attend.” 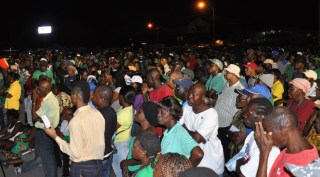 According to the Leader of the Alliance For Change, his presence at the rally would have been inconsistent with his personal position that “I will not want to be on an opposing party’s platform.”

He also noted that “If the platform was say an anti-dictatorial front platform, I certainly would have been there. But that is my personal position which ought to be respected for what its worth. Other members and leaders can have their individual approaches. After all we are very liberal and democratic in the AFC. The Vice Chair and GS who thought they be there, were there.”

Political Analyst David Hinds in a letter to the media criticised the absence of Nagamootoo and Ramjattan from the Opposition meeting at the Square of the Revolution. Hinds wrote that a “wrongheaded” decision.

According to Hinds “the AFC continues to be unsure about how to deal with the sensitivities about alliance with the PNC within the Indian Guyanese community and the readiness of the PPP to exploit that issue”.

He said he still believes that Moses Nagamootoo speaking to Indian Guyanese from the Square of the Revolution would be a bold step in the direction of ethnic solidarity and reconciliation.

“The movement for the restoration of democracy would be most effective if it is a multi-ethnic one, even as one must concede that African Guyanese would have to lead the way. Sending only African Guyanese speakers to African Guyanese dominated events is wrongheaded”, Hinds wrote.

There have been calls for the Alliance for Change and A Partnership for National Unity to form a broad alliance to head into any upcoming elections. While many AFC members have expressed support for such a move, Ramjattan has not been shy to hide his total opposition to any such alliance.

Responding to a question on Facebook about his opposition to an alliance with the APNU, Ramjattan was adamant that “the biggest blunder the APNU and AFC can make at this point, in their individual objective to displace the PPP, is to merge.”

He said “apart from the huge challenges and dilemmas which will have to be confronted and surmounted in relation to a host of administrative issues, the serious error behind such a merger will be the dissolution of the AFC in the eyes of non-supporters of APNU, largely East Indians but not exclusively them.”

At Friday’s rally, AFC Chairman Nigel Hughes spoke before the mostly APNU supporters about his party’s role in working together with the APNU on national issues. Hughes said being on the same platform with the APNU is just the beginning of a very broad alliance of all Guyanese. He added that “every single citizen in this country must stand up because we are not going to allow some President to sign a paper and turn us into a Kingdom”. He said “these are very serious times” and Guyanese should not take the issues facing the country for a “joke”.