Just over 200 persons gathered in a poorly lit street in the village to join the People's Progressive Party in its observance public meeting to pay tribute to the Enmore Martyrs. Perched behind a podium in the back of a canter truck, former President Donald Ramotar told Enmore residents on Monday evening that they must remain vigilant and join the struggle against the new government.

Just over 200 persons gathered in a poorly lit street in the village to join the People’s Progressive Party in its observance public meeting to pay tribute to the Enmore Martyrs.

The tribute meeting appeared more like a political rally as the former President addressed the crowd from behind a podium with the words “VOTE PPP/C”.

Mr. Ramotar told the residents that the PPP was cheated out of office and he believes that the Elections Commission was penetrated and that resulted in the victory by the APNU+AFC coalition. 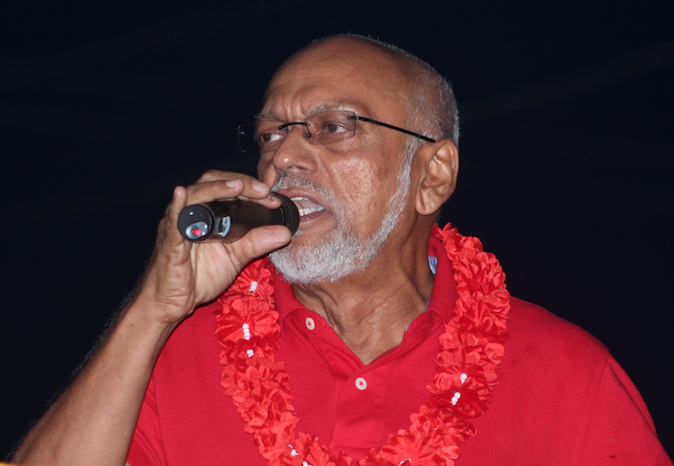 The PPP continues to say that the elections were rigged although the international community and observers have declared the elections as free, fair and credible.

The former President said there must be changes at GECOM and Steve Surujbally is no longer fit to serve as Chairman of the Elections Commission.

But Mr. Ramotar focused much of his 20 minute speech on the new government which has been office in just over a month.

He told the Enmore residents that they need to keep their eyes on the new government because he is convinced that “squander-mania” has started.

“We are already beginning to see the contours of what is to come in this country if this thing is allowed to continue” Ramotar said.

He said while the APNU+AFC promised fewer ministries, it now has in place 26 government ministers and the government is already showcasing its intolerance to different type of view. Ramotar accused the new government of dismissing government workers because of their links to the PPP and their race.

“For no good reason, they have started an onslaught on the Guyanese people”.

Mr. Ramotar complained bitterly about some of the former officials of his government who were sent packing by the new administration. He said that proper reasons are not being offered for those dismissals.

The new government has sent packing a number of permanent secretaries who served as candidates for the PPP at the last elections. Many of them had resigned from office so that they could be on the campaign trail. Under the PPP, they would resume their public service jobs just after the elections but the new government has decided that those who resigned shall remain resigned. 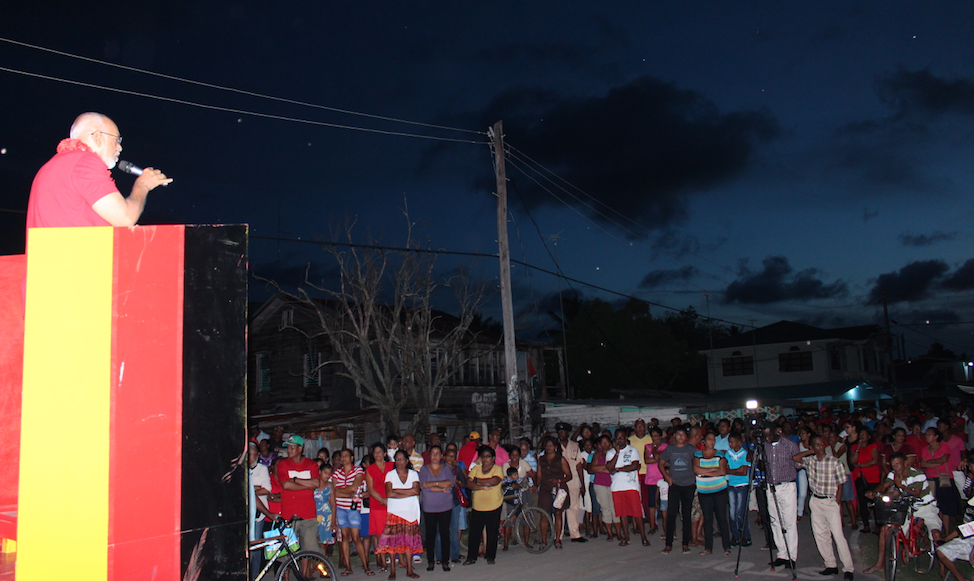 The former President accused the new government of trying to get out of many of the promises that were made on the campaign trail by complaining about empty accounts and corruption. He said his former government is being slandered.

Ramotar said although in opposition, the APNU and AFC made known its concerns about corruption, he finds it difficult to under why the new government has not been able to find all of those cases.

Just last week, Minister of State Joe Harmon revealed that the PetroCaribe fund is empty. Mr. Ramotar told the public meeting that he ran an accountable government and if the new government decides to go through Finance Ministry documents, it would see how the money was spent.

“Every single dollar that came into PetroCaribe was recorded and the records are there and every single outflow is still there”, he said.

He likened the PPP being in opposition to sort of a struggle that the Enmore Martyrs faced but he reminded residents that they should continue to be in support of the party and its work.