Some key players in the local rice industry are sending a strong message to the People’s Progressive Party Civic (PPP/C) government that the game is over for the 22 – year – old administration with indications that they will encourage other rice farmers and millers to vote for the newly formed opposition coalition when Guyanese head to the pools on May 11.

Some Rice farmers believe that the PPP/C administration has too much of a tight grip on the industry which was built by the private sector and claim that they have self-engineered a crisis that is likely to worsen in coming weeks.

They are accusing the administration of a massive cover-up and claim that there is more than 100,000 tons of paddy from last crop that may still be at Rice silos around the country with no market to dispose of this surplus.

In the next 3 weeks, more than 400,000 tonnes of paddy will be harvested and rice farmers say there are no arrangements being made to find market for this new intake.

“This impeding crisis has been created as a result of the unnecessary control of the industry by the Minister of Agriculture, Leslie Ramsammy, and his PPP cronies at the Guyana Rice Producers Association, a front-organisation of the PPP and the Guyana Rice Development Board,” Chair of Rice Producers Association Action Committee Jinnah Rahman told reporters on Thursday. 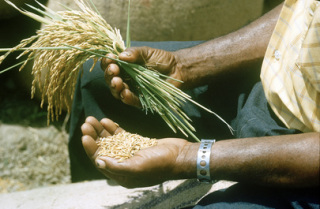 He said its time the administration give rice farmers the industry to manage and operate by themselves.

Rahman is calling on all rice farmers to vote solidly for the APNU/AFC alliance on May 11.

“No longer would we allow any future government to control the rice industry… we have to take this political stand,” he added as he declared that President Donald Ramotar and all his Ministers and Cabinet Members are all rice eaters that do not fully understand the rice industry; causing many farmers to suffer, having to sell their produce at cheap rates.

Meanwhile, Co- ordinator RPA Action Committee and International Specialist on the Rice Industry Dr. Turhane Doerga said that the PPP/C must stop taking credit for the successes of the industry which he said started even before they took office in 1992 and is as a result of the work private farmers have done.

He supported his colleague’s call for rice farmers to turn their backs on the PPP/C and accused the administration of covering up the fact that the Venezuela deal was used for families and friends of the incumbent to the detriment of the industry. “The chaos in the rice industry is near boiling point.”

He presented a collective list of demands which include the urgent formation of a professional committee of world experienced brokers to market the rice at acceptable prices.