US government wants Guyana Elections to be Policy Driven The Embassy of the United States in Georgetown has welcomed the President’s announcement of a date for national elections and now wants to see the contesting parties focus on policy issues.

President Donald Ramotar on Tuesday evening announced May 11, 2015 as the date for national elections.

In an exclusive interview with News Source on Wednesday at the Embassy,  Chargé d’affaires Bryan Hunt said the US government hopes that the 2015 general and regional elections in Guyana will mark a change in Guyanese politics.

“I hope that this election will mark a change in Guyanese politics and that what we will see from all parties, civil society and every media, will be a vigorous discussion about very important policy choices that the next Guyanese government would have to make”, Hunt said.

“I hope that each of the parties is going to put forward their solutions to the various problems that confront the nation and that media and civil society will talk with the parties about those choices and options that are out there for Guyana to pursue and that what we will see is a vigorous policy debate that gives the Guyanese public a clear choice between policy options so that people vote less upon their racial or ethnic makeup and more upon on what they believe will be the right course for the Guyanese people”. 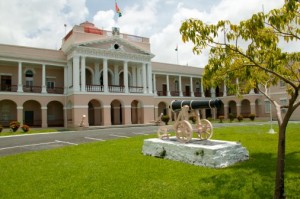 According to Mr. Hunt, a policy debate is needed because when one looks at the 10th  parliament and the “gridlock” that existed, it is clear that there were a number of lost opportunities. He highlighted the non passage of the amendments to the Anti Money Laundering Bill, the continuous delay in the hosting of local government elections and the issues surrounding Amalia Falls hydropower development as “lost opportunities that could be attributed to the gridlock” in the parliament.

“I would hope that this election will allow the public to hear where the parties  want to go and get them to commit themselves on issues and to get them to clearly lay out what their vision is, so that the electorate itself could hold them accountable”, the U.S Envoy noted.

He said the political leaders ought to address issues related to their vision for Guyana and should  do so publicly so that voters are better informed.

The governing and opposition parties in Guyana have all welcomed the announcement of the elections date by the President. The governing People’s Progressive Party in a statement said it is “ready and steady” for the elections and its electioneering machinery is well oiled. The Opposition parties have indicated their concerns about the “misuse and abuse of state resources” by the PPP to aid that party’s election campaigning efforts.

The US Embassy believes that as Guyana heads into another elections, there will be the need for attention to be paid to the reports compiled by the Organisation of American States, which served as one of the observer groups for the 2011 elections. The OAS in its report raised concern about the inequitable access to state  media and the need for the state media to serve  and address issues related to the state rather than any one political party.