"It is worth asking the reasons that the International Court of Justice is recommended to two States that do not recognize their jurisdiction, since the Geneva Agreement itself provides for the political means for the settlement of the territorial dispute. In this sense, Venezuela ratifies in a decisive and unequivocal manner the negotiation process under these means" the Venezuelan Government said. The Government of Venezuela has rejected the decision by the Secretary General of the United Nations to refer the territorial controversy case to the International Court of Justice.

In a statement issued on Wednesday, Caracas said it prefers another shot at the Good Officers’ Process.

“It is worth asking the reasons that the International Court of Justice is recommended to two States that do not recognize their jurisdiction, since the Geneva Agreement itself provides for the political means for the settlement of the territorial dispute. In this sense, Venezuela ratifies in a decisive and unequivocal manner the negotiation process under these means” the Venezuelan Government said.

Guyana has always been pushing for the matter to be referred to the International Court and has welcomed the decision. President David Granger told reporters on Wednesday that Venezuela should also show maturity and accept the decision, pointing out that both sides had agreed to the terms of the talks at the UN Secretary level and allowing him to decide on the way forward.

But Venezuela says it recorded its strong opposition to the letter of December 15, 2016, signed by the former Secretary General Ban-Ki Moon.

That letter made it clear that if there was no success at the Good Officer’s process by the end of 2017, the matter would be referred to the International Court.

However, Venezuela believes that the criteria contained in it that letter from the former SG “exceeded the powers granted to its investiture, contravening the spirit, purpose and reason of the Geneva Agreement and the principle of equity concluded between the parties.”

According to the Venezuelan government, the Secretary General’s communication goes beyond the successive nature of the means of peaceful settlement established by the Geneva Agreement as a methodology established to reach an acceptable, practical and satisfactory solution to the dispute.

It reminded that during 2017, it maintained its historical position in the process of good offices of the UN Secretary General. 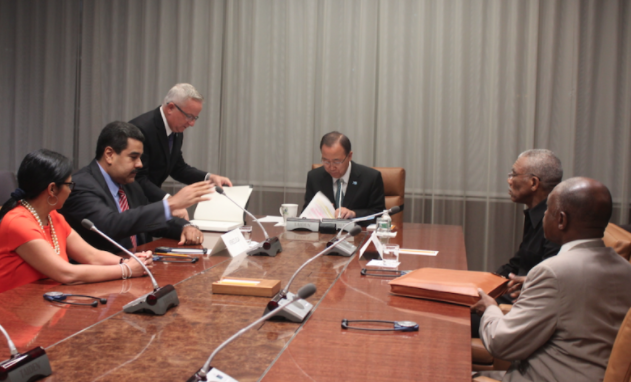 The President of the Bolivarian Republic of Venezuela, Nicolás Maduro Moros, is now guaranteeing the Venezuelan people that he will continue defending “the sovereign rights over Guayana Esequiba and calls for national unity to protect the most sacred interests of the Homeland”.

In a statement just after the UN decision was handed down, Guyana’s Foreign Affairs Ministry said Guyana has always held the view that the ICJ is the appropriate forum for the peaceful and definitive settlement of the controversy, and is pleased that, that view has prevailed under the process developed by both Secretary General Ban Ki Moon and Secretary General Antonio Guterres.

“Guyana will not allow factors extraneous to the controversy to influence its referral to the Court; but it will continue the advancement of peaceful relations with Venezuela whose people are the brothers and sisters of Guyanese, In this context, Guyana acknowledges the Secretary General’s suggestions for the immediate future”, the Ministry said.

The Ministry said it is to Guyana’s credit that it has stood firm against Venezuela’s attempt to re-open a territorial boundary settled and recognised for half a century before its independence, and done so despite the manifest unequal strengths between the two countries, is to our national credit.

“Guyana, as one of the world’s small developing countries, is pleased that its reliance on the rule of law internationally has been the underpinning of its national sovereignty”, the Ministry noted.

Guyana’s President David Granger has indicated that Guyana is ready for the move to the International Court.