Thirty-four years after his death, the Commission of Inquiry (COI) into the death of historian Dr. Walter Rodney began hearings today at the Supreme Court Library. Lead Counsel for the Commission Glen Hanoman announced that during the four days of hearings, nine persons will be called to testify into Dr. Rodney’s death.

Rodney was killed on June 13, 1980, when a bomb exploded in the car in which he was sitting. He was 38 years old at the time. Nine years ago, Parliament unanimously approved a motion to establish a commission to enquire into the circumstances surrounding his death.

Crime Chief James in his testimony today turned over six files on Dr. Rodney and the Working People’s Alliance (WPA) to the Commissioners. Three of the files were those in his possession as Crime Chief and the other three he had obtained from the previous Crime Chief, now Commissioner of Police (ag).

However, it was noted that the files from the Crime Chief’s office were numbered eight, nine and ten. The Crime Chief acknowledged that the files were done in numerical order and he could not say where the other seven files were. He explained to the Commission that he would not have had them destroyed since he felt that the issue was a pertinent one. He suggested that since the files he had handed over to the Commission were dated 1980, the previous files would have been dated prior to that. Crime Chief James had joined the Police Force in February 1987 and worked his way up to the Special Branch in 2012. 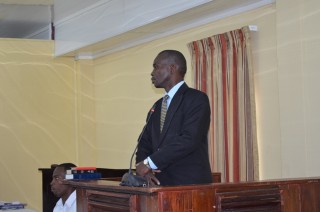 Reading aloud from the report issued by Dr. Skuse, the Crime Chief indicated that from evidence gathered an explosive device went off in Dr. Rodney’s lap triggered by a radio signal. The report also indicated that the TNT used in the explosive was similar to that used by the GDF whilst the radio signal was not.

He also produced an arrest warrant and issued by Detective Frederick Ceasar in June 1996 for the ex-GDF Sergeant Gregory Smith for the murder of Dr. Rodney. The Crime Chief however, could not give a reason why the police only issued the warrant 16 years after the death of the historian.

James could also not confirm for the Commission whether an inquest into the death of Dr. Rodney took place and when. He subsequently agreed that one did take place in 1988 when this was read to him from a document in the possession of the Commission’s Counsel Team.

The Crime Chief was dismissed today, after being informed that he may be required to return to answer more questions at a later date.

The witnesses named to testify during the four days are Father Malcolm Rodrigues, Crime Chief Leslie James, Karen DeSouza, Lawrence (Eddie) Rodney, Rev. Ruben Gilbert, Lincoln Lewis and two other persons one from the Guyana Police Force Special Forces (Death Squad) and the other from the Guyana Defence Force (GDF). Counsel Hanoman said he would not name the other two witnesses since they had expressed concerns for their safety.

Prior to the Crime Chief taking the stand, Chairman Cheltenham gave an opening presentation into the hearings during which he outlined the qualifications of the Commissioners as well as the life of the late Dr. Rodney. Cheltenham also outlined the role of Counsel Hanoman in the COI, noting that he will only pursue lines which the Commission thinks pertinent. Cheltenham also emphasised that it is an Inquiry and not a Court of Law and as such anything pertinent will be taken into account including opinion evidence as well as hearsay.

Chairman Cheltenham also cautioned the media to maintain balance and restraint in their coverage of the events.

The purpose of the hearings before the Commission is to receive testimony and evidence from interested parties to enable it to examine the facts and circumstances immediately prior, at the time of, and subsequent to, the death of Dr. Walter Rodney in order to determine, as far as possible, who or what was responsible for the explosion resulting in the death of Dr. Walter Rodney.

It will also inquire into who may have facilitated the departure of Gregory Smith from Guyana after Dr. Rodney’s death, and report on the actions and activities of the State, Guyana Police Force, Guyana National Service, Guyana People’s Militia and those in command of these agencies, and actions against the Political Opposition, for the period January 1, 1978 to December 31, 1980. (GINA)