The Chairman of the Walter Rodney Commission of Inquiry, Sir Richard Cheltenham of Barbados, not only knew the late Dr. Rodney well but was inspired by his struggle.

New questions emerged Tuesday night about whether a conflict of interest now exists with Dr. Cheltenham serving on the Commission having known Dr. Rodney, considered him a friend and having offered tributes following the death of the Guyanese politician.

The Advocate News of Barbados on  the 30th June, 1980 carried a Page 1 story titled “Cheltenham pays tribute”. The story reported on a memorial service that was held in Barbados for Dr. Walter Rodney two weeks after his death.

Cheltenham was quoted by The Advocate News as saying that he first met Walter Rodney in the 1962-63 academic year at Mona Campus “and every meeting convinced me that he would distinguish himself. One could not but be impressed with his robust, resourceful and many sided mind”.

“For me, however, the most striking thing about Rodney within recent years was his concern for quickening the pace and altering the direction and content of social change in the region”, Cheltenham was quoted as telling the large audience that gathered Ursuline Convent for the memorial service. 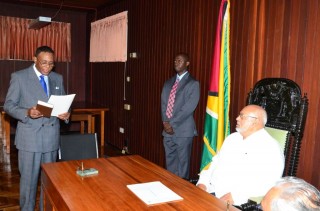 The newspaper further quotes the Commission Chairman as saying at the memorial service that Rodney wore a “charisma”.

“It was not the charisma of office or of a large and arresting physical appearance. It was simply his profundity and his commitment. Whatever attempts are made to envelop his death in confusion and surround it with controversy, I do not doubt that it has brought solace to those who saw his presence and his preachings on the political scene as a threat to their political survival”, Cheltenham said, according to the Advocate News.

The Barbadian Newspaper further quotes him as saying that he was inspired by Walter Rodney and his work. According to The Advocate, Cheltenhan said “those of us who knew him and were inspired by him must continue to work for social change and the betterment of our fellow citizens, which was his goal”.

“We can only hope that it will soon be lit again and that his comrades, friends and admirers will continue to keep aloft the banners which he raised and which men were proud to follow”, Cheltenham said.

In what the June 30, 1980 edition of The Advocate News described as a glowing tribute, Cheltenham said Rodney was first a Caribbean man and secondly a third world man. He said at the time that in Rodney’s death, the Caribbean had lost one of the finest minds of his generation.

The memorial service in Barbados was attended by Rodney’s widow and his three children according to the newspaper report. Cheltenham was among five speakers who paid tributes. One of the other speakers who gave tribute was Dr. Richard Allsopp, who was at the time a Reader in English Language and Linguistics, Cave Hill Campus University of the West Indies. In his tribute which was done in the presence of Cheltenham, Dr. Allsopp described the suggestion that Rodney was killed while trying to blow up the Georgetown prison as a “revulsive lie”.

The Commission of Inquiry began its public hearings on Monday. The Peoples National Congress which was in government at the time of Rodney’s death has opted to only have lawyers present at the Commission to represent the interest of the party. The PNC and other groups have questioned the timing of the Commission and whether it was an impartial one. Questions were raised about one of the Commissioners, Trinidadian Senior Counsel, Seenath Jairman who represented the PPP government in the budget cuts case.

When the Opposition raised its concerns about that, the Chairman, Sir Richard Cheltenham said “I don’t see how working on a brief for the government will mean and can mean that he is affected by any bias. As a lawyer, it makes no sense”.