The 31-year-old Loncke said she was sitting minding her own business and listening to the US President on stage when he called out her name and offered recognition for her business efforts in Guyana.

As if participating in President Obama’s Young Leaders of the Americas Initiative was not enough, young Guyanese business woman, Abbigail Loncke, has been left on cloud nine after the US President himself recognised her and her business efforts during his final international speech and town hall meeting in Peru.

The 31-year-old Loncke said she was sitting minding her own business and listening to the US President on stage when he called out her name and offered recognition for her business efforts in Guyana.

President Obama told the large audience of youth leaders in Peru that “We need leaders like Abbigail Loncke of Guyana”.

“Abigail are you there?”, he asked, as he looked around and Abbigail stood to her feet.

Mr. Obama continued, “So after struggling to find her own grandfather a home care, Abigail realized there is a problem for so many other families, so she started Community Healthcare, a home care agency, and she started out as a service to help families take care of their loved ones but now has a social movement that also provides training and job opportunities for young women in healthcare so thank you Abigail for the work that you are doing”.

Ms. Loncke was one of four Guyanese who were chosen by the local embassy to be part of the Young Leaders of the Americas Initiative in the United States back in October.  Following the programme, which took the more than 250 participants to different U.S stated during a six week period, Abbigail was chosen as one of the specially selected participants to fly across to Peru for President Obama’s town hall meeting with young leaders from the Americas.

Speaking to News Source from Peru on Sunday morning, she explained that gaining recognition from the outgoing U.S President is not something that she expected, although being part of a programme that he started.

“I feel extremely grateful to even be recognized by President Obama and to be apart of history, as that was the last international speech for President Obama. This is the beginning of something great for my company and I’m still on cloud nine right now”, she told News Source.

She said she hopes that her business will now gain more support from Guyanese both in and out of Guyana “and that we can contribute more to the care of the elderly. I really want to use this time to also help young Guyanese entrepreneurs gain the skills that we were privy to during our Young Leaders of the Americas Initiative experience.” 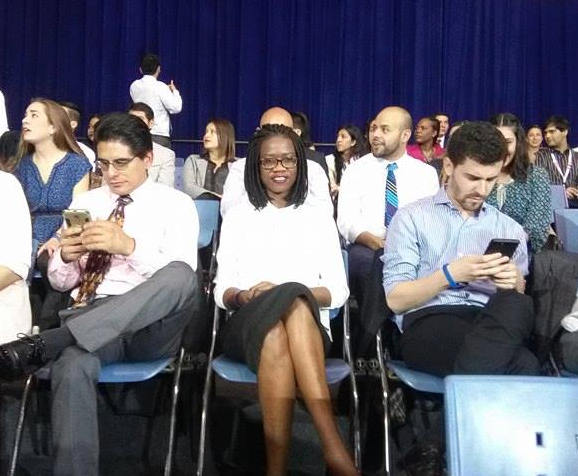 Abbigail absorbs the moment as other participants focus on their phones

Abbigail’s company, Community Health Care, was started in 2014 and since then she has been developing it to become the leading agency in Guyana for adult care and care for the elderly.

She has brought together qualified and trained nurses and other health professionals and has been offering home care to many elderly persons across Guyana. In addition to care for the elderly, the company also offers baby care and tuition services.

For more information about the company and the services being offered, visit the company’s Facebook page Community Health Care.