But the victory over England at Eden Gardens was marred when a long-running spat between players and the Caribbean board erupted into public.

But the victory over England at Eden Gardens was marred when a long-running spat between players and the Caribbean board erupted into public.

The West Indies went into the last over needing an unlikely 19 against the bowling of Ben Stokes.

Brathwaite astonishingly cleared the ropes four times in a row to fire the Windies to a four-wicket win with two balls to spare.

“To see Carlos play like that at his debut World Cup was just tremendous,” an emotional West Indies skipper Darren Sammy said afterwards.

The gloss was soon taken off the scenes of unalloyed joy for the West Indies, who were also celebrating their women’s Twenty20 final victory against Australia earlier, when Sammy gave vent to months — possibly years — of frustration with the West Indies Cricket Board (WICB) in a post match interview.

Referring to a lengthy and bitter pay dispute that had put their World Twenty20 participation in doubt, the all-rounder said his team felt “disrespected by our board”.

“We had a new manager in Rawle Lewis, who has never managed a team before. We had no uniforms, no printing,” said Sammy.

“The trouble he went through to just get us in this uniform. I got to give credit to the entire team here.” 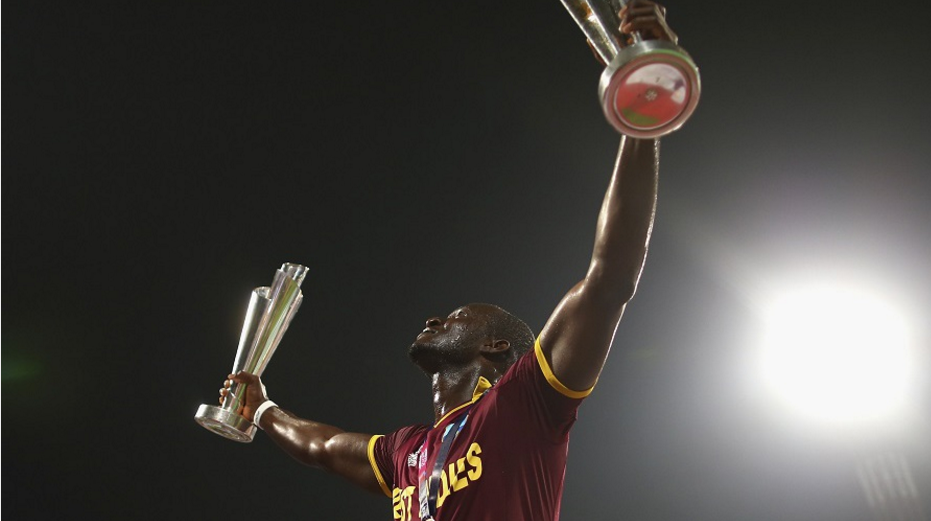 Sammy also thanked Grenada Prime Minister Keith Mitchell for a good luck message received hours before the final and then had a swipe at West Indies cricket chiefs.

“I’m yet to hear from our own cricket board. That’s very disappointing,” said the 32-year-old.

Several hours later, the board slammed Sammy and apologised for his comments in a statement issued in Antigua and curiously headlined “WICB President has high praises for World Twenty20 Organisers”.

“The President would like to however apologise for what could be deemed inappropriate, comments made by the West Indies’ male captain, Darren Sammy in a post-match interview and would like to apologise on behalf of the WICB, to the millions of fans who witnessed (sic),” said the statement.

“The President has pledged to enquire the reason and will have the matter addressed.”

Meanwhile England captain Eoin Morgan in his post-match interview refused to blame the crestfallen Stokes for the heart-breaking defeat.

“It’s not his fault, we’re all in this together, we enjoy our wins, and the pain will be shared tonight,” he said.

Marlon Samuels anchored the West Indies’ run chase of 156 with an unbeaten 85, including nine boundaries and two sixes, after England had posted 155 for 9 in their 20 overs.

After being reduced to 11 for three, Samuels single-handedly kept the Caribbean team in the hunt with his 66-ball blitz.

Brathwaite finished on 34 not out off just 10 balls as the 2012 champions triumphed for a second time.

“Everybody in the West Indies is a champion,” beamed Sammy.

Chris Gayle, who had put England to the sword with an unbeaten century in the group stage encounter, then heaved Root to the same fielder in the deep at long-on to trigger wild celebrations.

Willey trapped Lendl Simmons leg before wicket for nought to leave the Windies tottering at 11 for three.

Samuels counter-attacked by hitting Chris Jordan for three boundaries in the sixth over and rebuilt by constructing a 75-run partnership with Dwayne Bravo (25). 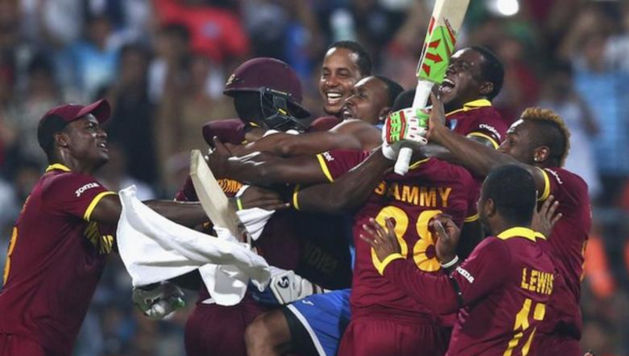 Willey struck twice in his second spell as the asking-rate grew and England sensed victory before Brathwaite’s barrage turned the game on its head at the end of an unbeaten 54-run stand with man-of-the-match Samuels off just 25 balls.

“I can’t really express how much of a top knock (by Samuels) that was. We couldn’t turn back, it was a question of when not if,” said Brathwaite.

Badree bowled Jason Roy for a second ball duck and also accounted for the struggling Morgan for five in his third over.

Root and Buttler rebuilt with a 61-run fourth wicket partnership.

After Root departed for 54, David Willey’s late cameo of 21 was studded with a boundary and two sixes to give England’s bowlers a respectable total to defend.