The Prime Ministerial Candidate of the People’s Progressive Party Civic, Elisabeth Harper has made it clear that she wants to see a whole lot more done in Guyana to support the fight against domestic violence.

Ms. Harper made her maiden rally speech on Sunday afternoon at the first rally for the PPP Civic in Kitty. She told the large crown which gathered that she shares a vision for a better Guyana with the PPP and that was one of the reasons behind her decision to accept the Prime Minister Candidate position.

Harper who in the past admitted that she was a victim of domestic violence during her first marriage, told the Kitty rally that a new PPP Civic administration will put new and improved legislation in place to tackle the problem that continues to affect women across Guyana. She said a Special Crimes Unit would be set up in the Guyana Police Force to cater more for victims of domestic violence and children who have been abused.

She also touched on the issue of teenage pregnancy and said girls who are forced to leave school because they become pregnant must be given a new opportunity and a new shot at life. She said programmes will be put in place under a new PPP government to support such cases. In her first television interview on NCN, Ms. Harper had also admitted to becoming a mother at the age of 17 and being forced to leave St. Roses High because of the pregnancy.

“Once elected, you have my personal commitment that I will continue to build on the foundation made by the PPPC and President Ramotar to deal with these issues that are so close and personal to me. I will ensure that we maintain and enhance the process of consultation which has begun on these and several other issues with the sole aim of improving the lives of all of our people”. 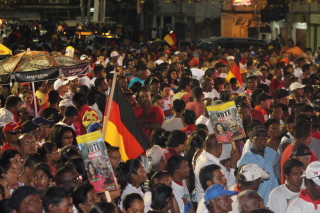 She went on to say that once Guyanese work together, the country could win the fight against domestic violence and teenage pregnancy and offer more care for the elderly. The PM Candidate called for a tougher stand against crime and a greater fight against that problem in Guyana.

Ms. Harper also told the rally that more should be done to encourage Guyanese in the diaspora to return home and that is an area she would want to focus on once she comes the next Prime Minister of Guyana.

The Prime Ministerial Candidate who served as the Director General of the Ministry of Foreign Affairs for over a decade said as Prime Minister she will also work to ensure that Guyana’s sovereignty is protected. She said the country must ensure its standing in the international community and that will also be an area of focus for her.

She recalled growing up in Kitty and the many happy moments she shared during those years. She said she still lives in Kitty and is pleased that she stands on the stage with the PPP as the party returns to her home village to launch its political rallies.

Harper kept her speech pointed and she stuck to the script. She never spoke of the Opposition or any of the candidates on that side.

With her husband and daughter cheering her on in the background on the stage, she said children should encourage their parents to vote for the PPP and on elections day when the parents would have voted the children should ask questions about how they voted and tell them that they hope the vote was cast for the PPP.