AFC to Ramotar: “Bring it on. We are ready” Addressing party delegates in the auditorium of St. Stanislaus College, AFC Leader, Khemraj Ramjattan rallied delegates to declare that the party was ready for the elections.

“We are ready to fire the PPP government from office”, Ramjattan shouted, to the loud applause of the party’s delegates. He said Guyana remains at the crossroads under the PPP Civic administration and it was time that they be thrown out of office.

He told the gathering that the PPP has been served with its notice of termination through the prorogation period and it will soon realise that its services are no longer needed.

According to Ramjattan, his party has already started widespread consultations with other groups across Guyana in its preparations to putting up a united front to challenge the PPP at the upcoming elections. He said his party is confident that it has the capacity and leadership “to offer Guyana a better deal”, than what has been given to the nation after 22 years of the PPP in office. 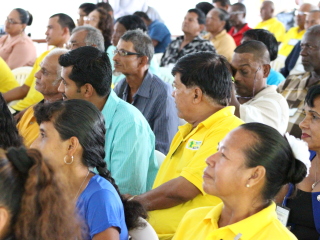 Ramjattan said the country has now found its way at the “dysfunction junction” thanks the governing party and it was time that change be initiated. The AFC Leader said there must be cooperation at every level to move Guyana forward and the party remains committed to working along with A Partnership for National Unity in the efforts to ensure a better Guyana. He added that the AFC also remains open to those members of the PPP who are looking for change and who have had “enough” of the way the PPP has been doing business in government.

Delegates were told that the Alliance For Change is ready and capable to lead a “pro-democracy alliance” and will be looking to build its movement.

He said for Guyana to move forward, there must be constitutional, economic, social and governance reform. Adding that “we are not going to do it alone”, Ramjattan said all Guyanese must become involved in the efforts to bring democracy back to the country.

“We have to at the individual level, live the life of true patriots and true citizens”, he told his party’s congress. He said citizenship is not just about voting and being law abiding, but rather it is also about “thinking”.

The AFC Leader said it is time to rip out corruption at every level of the Guyanese society. He said governments must be accountable and the AFC should be held to the same standard if it takes office.

The AFC’s biennial delegates conference brought together party delegates from across the country.