APNU not prepared to support Budget without amendments Just one day after President Donald Ramotar said he was upbeat about the National Budget receiving the full support of the National Assembly in its current form, Opposition Leader David Granger is assuring him that there is no way A Partnership for National Unity will support the Budget estimates without amendments.

At a press conference at the Leader of the Opposition Office  on Friday, Mr. Granger said the Partnership is not prepared to approve Budget 2014 as presented without significant amendment.

“APNU’s position is grounded in the fact that this year’s Budget is not forward-looking or development-oriented. It has provided no solid plan for the poverty reduction, employment and social protection among other critical deficiencies”, the Opposition Leader noted.

He said in its preliminary analysis of Budget 2014, the APNU  remains concerned about “the failure of the PPP/C administration to address a number of factors which are necessary for national development”.

Among the factors he highlighted was poverty reduction. According to the Opposition Leader, widening income disparities by which the few rich are becoming richer and the many poor are becoming poorer are more evident than ever before.  He added that “this is aggravated by the spiralling cost of living. Budget 2014 offers no relief to the plight of the poor and vulnerable who include the aged and young unemployed men and women”.

He expressed worry that the budget does not provide realistic job opportunities for the thousands of school-leavers including dropouts and the large numbers of under-employed poor and rural dispossessed. The levels of pay and conditions of work for public servants, including nurses, teachers, defence and security personnel, must be reviewed. 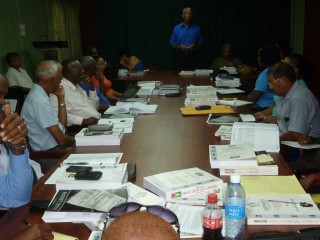 On the social front,  the Opposition Leader said there must be urgent and far-reaching reform in order to avert a deeper crisis in the National Insurance Scheme, adding that there should also be special attention paid to providing a ‘living pension’ for the socially vulnerable including old-age pensioners.

He said the proposed $625 increase to the old age pension is inadequate.

The APNU also wants to see the reform of the tax system move forward.

The Partnership has taken note that the promise by the Government to establish a Commission to examine the tax regime is still to really get any work done.

The APNU Members of Parliament have been meeting to examine the budget estimates put forward by the Minister of Finance and several areas are already being looked at for review.

Mr. Granger said the budget has proposed another “massive transfer of funds to public corporations – such as the Guyana Sugar Corporation and Guyana Power and Light”. He said those transfers will be resisted since there must be bipartisan agreement on appropriate reform and restructuring proposals in return for the transfers to the state corporations.

The Finance Minister Dr. Ashni Singh on Monday presented his $220 Billion budget, promising a better life for all Guyanese. The National Budget Debate begins on Monday.