News Source understands that the intelligence community has received screen grabs of a WhatsApp conversation between a number belonging to Charrandass Persaud and a friend of his who knows several persons in the gold mining community. The Guyana Police Force is probing reports that Member of Parliament and expelled AFC Member, Charrandass Persaud was making plans to purchase US$1million worth of gold in early December.

The plans, according to senior security sources, were being made as the National Assembly was debating the budget and getting ready for the no-confidence motion against the government.

It was Charrandass Persaud who voted along with the Opposition to move the motion of no-confidence against the Government. He was a Government Member of Parliament.

Since the vote, Persaud has been claiming that his vote was done as a “conscience” vote, since he was not happy with the Government, although days before, he showered praises on the government.

But reports are now surfacing that it might have been a corrupt practice that led to his vote. The PNC Reform, which is the largest party in the coalition government, has already accused Persaud of accepting a bribe for his vote.

News Source understands that the intelligence community has received screen grabs of a text messaging conversation between a number belonging to Charrandass Persaud and a friend of his who knows several persons in the gold mining community.

In the conversation, the number belonging to Persaud was inquiring about the purchase of what is believed to be gold, but referred to it as casareep.

News Source has also seen some of the same screen grabs.

“I need some REAL casreep…not the diluted one…let me know”, the number belonging to Persaud wrote, while the friend enquired about the amount he would need.

Later in the conversation, the number belonging to Persaud was seen inquiring again about the “need to get this project off the ground”.  Later, the other man in the conversation was asked “weh de raas u deh”, and he responded that “I spoke to my people, the water was high, so they were not workin”.

Charrandass Persaud closes his eyes after voting against the government in the no-confidence motion. Peter Ramsaroop raises his fist in victory in the background

The two then made plans to meet during a Parliamentary break and the man asked “Could you give me an ideas how much they are looking to purchase first up”.

The two went on to discuss their meeting and other plans.  All of those conversations were taking place on the 6th and 11th December.

On December 12th, the man, who the number belonging to Persaud was in contact with, messaged to say that “I have good news can we meet”.

“You tell me when…”, Persaud’s number responded, and they made plans to meet the following day.

On December 13, the man inquired about the break time for Parliament and sought to set up a meeting with a third person.

Officials in the intelligence community believe that third person was a gold miner who operates in the downtown, Georgetown area and who may have been the person to sell the $1 million worth of gold.

After his vote in the National Assembly on December 21, Charrandass Persaud left the Parliament building in the company of businessman and PPP supporter, Peter Ramsaroop. 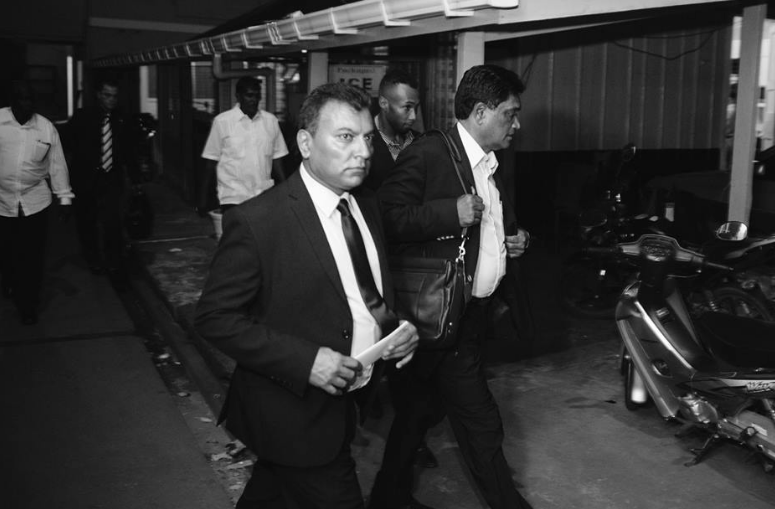 Early the next morning, he boarded a LIAT flight from Ogle and  connected to another flight to Toronto, Canada.

He was accompanied to the Ogle Airport by Peter Ramsaroop, who reportedly was granted access to the tarmac of the airport and was allowed to walk Persaud straight to the stairs of the LIAT plane.

Persaud has since traveled over to Queens, New York from Toronto, where he has been hosting small meetings about the no-confidence motion and encouraging persons there to tell their families in Guyana to vote against the coalition government, when elections are called.