The 23rd meeting of the Council of Ministers of the Caribbean Forum of African, Caribbean and Pacific States (CARIFORUM) got underway in Georgetown, Guyana on Thursday morning with calls for the re – examination of the region’s relationship with the European Union and the strengthening of coordination among members states.

LaRoque, who is also the Secretary General for CARICOM, urged member states to also use the opportunity to assess the long term relationship with the EU as the region continues to confront the challenges of climate change, disaster management and crime and security.

There were calls from Guyana’s Foreign Affairs Minister Carl Greenidge for the meeting to also consider ways to build on the relationship CARIFORM shares with the EU.

“The Caribbean – EU joint partnership strategy, concluded in 2014, is designed to rethink, reposition and refocus the longstanding partnership between the Caribbean and Europe,” Greenidge said.

He regarded the European Union as a valued development partner for the Caribbean.

The status of implementation of the European Development Fund (EDF) is of particular concern to Guyana. This is the fund through which the European Union (EU) provides grant aid to the African Caribbean and Pacific (ACP) countries. “In this regard, the joint strategy aims to deepen CARIFORUM-EU dialogue and structure the bi-regional cooperation to respond to existing and developing challenges and opportunities,” the Guyanese Foreign Minister added. 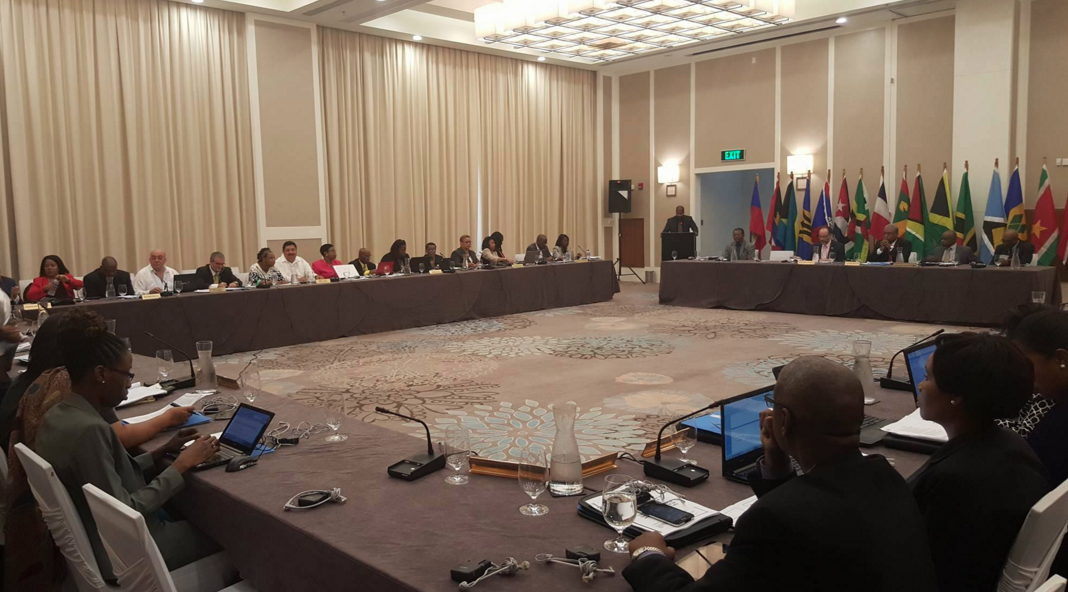 For many of the countries in the CARIFORUM grouping (Antigua and Barbuda, Bahamas, Barbados, Belize, Dominica, Dominican Republic, Grenada, Guyana, Haiti, Jamaica, St Lucia, St Vincent and the Grenadines, St Kitts and Nevis, Suriname, Trinidad and Tobago) the status of implementation is a challenge with difficulties at the level of the nation states and sometimes even at the level of the CARIFORUM body (secretariat), Greenidge said.

According to the Guyana Foreign Minister, one of Guyana’s main concerns is to ensure the rate of implementation is accelerated. He noted that much needed resources have been made available to the region however, due to numerous inefficiencies they cannot be utilized in a speedy process.

Other concerns are the slow decision making and inability to put in place implementation mechanisms on time.

Guyana is the immediate past Chair of CARIFORUM while Haiti is the current Chair for the six-month rotational chairmanship. Haiti’s Chief of Cabinet Hon. Jean Max Bellerive presented the feature address and placed the meeting into context.

He too was keen to point out the need for the meeting delegations to look at ways to strengthen the region’s cooperation with the EU.

Mr. Bellerive believes CARIFORUM is doing what it was established to do and is playing a key role in the harmonization of the EU and the region. “CARIFORUM has shown itself to be an important platform between the region and the EU and has helped us to work against the challenges and concerns that confronted the region.