CARICOM stands solidly behind Guyana in latest controversy with Venezuela

CARICOM Leaders wrapped up their 36th Regular Meeting in Barbados on Saturday evening and new Chairman of CARICOM, Prime Minister of Barbados Freundel Stuart said CARICOM will do everything in its power to ensure that Venezuela “plays by the rules”.

The Caribbean Community (CARICOM) has affirmed its commitment and solidarity to Guyana in wake of the latest threats from Venezuela.

CARICOM Leaders wrapped up their 36th Regular Meeting in Barbados on Saturday evening and new Chairman of CARICOM, Prime Minister of Barbados Freundel Stuart said CARICOM will do everything in its power to ensure that Venezuela “plays by the rules”.

The new CARICOM Chairman added that while the territorial dispute between Guyana and Venezuela is not new, CARICOM will do all that it can to ensure that peace and tranquillity is maintained in the region.  Stuart said both countries are committed to a process and it is the Caribbean Community’s hope that the process will “work itself out”.

“What one has to aim for, as the dispute continues, is a cooling of tempers. We do not think that there can be any compromise so far as Guyana’s territorial border is concerned. It is part of a process and that process has to work itself out.”  He however reiterated that given the fact that Guyana is an original signatory to the Treaty of Chaguramus, CAIRCOM has to stand firmly behind Guyana even as it tries to maintain a good relationship with Venezuela.

Prime Minister Stuart said CARICOM is not prepared to pollute in anyway their good relations between other CARICOM member states and Venezuela.  However, he said, thus far both Guyana and Venezuela have committed to maintaining peace and scope exists for an amicable resolution to the dispute.  Going forward, Prime Minister Stuart said, “We have to make sure that the situation does not spin out of control and ensure that level heads are held on both sides”.

President David Granger, in response to questions about what message he will be taking back to the Guyanese people on the issue, said he will assure them of CARICOM’s support and their commitment for maintaining peace. 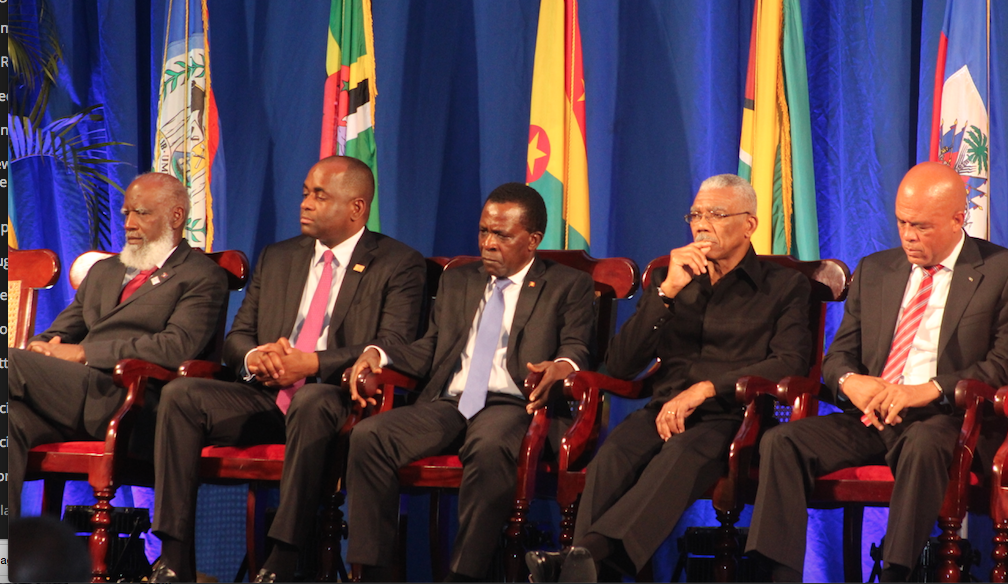 During his address at the opening of the CARICOM Meeting, President Granger blasted Venezuela’s aggression towards Guyana as “the monkey on Guyana’s back” that has stalled the country’s development. He said then that CARICOM must let its commitment to Guyana because Venezuela’s threats to Guyana through the decree is also a threat to regional integration.

The Prime Minister of Trinidad and Tobago, Kamla Persad-Bissessar on Friday announced that her government stands in full support of Guyana in wake of the decree by Venezuela claiming Guyana’s territorial waters.

Ms. Persad-Bissessar met with Guyana’s President David Granger on Friday morning for bilateral talks and just after those talks she indicated that Trinidad and Tobago could not sit “idly by” and not should its support for Guyana in the latest conflict with Venezuela.

“Trinidad and Tobago fully supports Guyana with respect to the border dispute with Venezuela. We have gone a step further and we have always had discussions in Port of Spain and collaborations with Guyana in matters dealing with Venezuela and so we have also offered to assist in any way that we can in having dialogue at the bilateral or multilateral level”, the Trinidad and Tobago Prime Minister said.

The United Nations has committed to send a mission to Guyana to address the issue.