The Opposition People's Progressive Party is pushing for the former President turned Opposition Leader to be the penultimate speaker in the budget debates. But the government on the other side wants Prime Minister Nagamootoo to be the penultimate speaker as he closes the government's debate and then make way for the presentation of the Finance Minister. The Speaker of the National Assembly may be forced to have the final say in what appears to be a growing fall out between the Government and Opposition over the position at which Opposition Leader Bharrat Jagdeo will offer his contribution to the budget debates.

The Opposition People’s Progressive Party is pushing for the former President turned Opposition Leader to be the penultimate speaker in the budget debates. That would mean that Mr. Jagdeo will find himself speaking after Prime Minister Moses Nagamootoo and before the mover of the budget motion, Finance Minister Winston Jordan who will close the debate.

The PPP believes an attempt may be afoot to muzzle Jagdeo as Opposition Leader.

But the government on the other side wants Prime Minister Nagamootoo to be the penultimate speaker as he closes the government’s debate and then make way for the presentation of the Finance Minister.

Government Chief Whip and Minister of Social Cohesion, Amna Ally is adamant that it is the Prime Minister who should speak before the mover of the motion.

She also reminded that the Opposition has 32 Members of Parliament while the Government has 35 Members, with three of them being non-elected members and therefore Mr. Jagdeo will have to speak before the Prime Minister because that has been “the practice”.

The Chief Whip for the Opposition, Gail Teixeira believes the government is going against tradition and a long-standing parliamentary convention as a tactic. 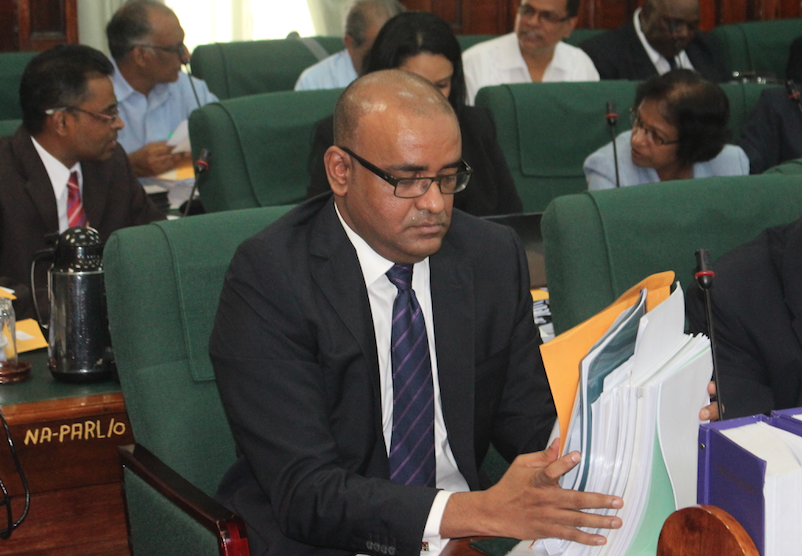 Leader of the Opposition, Bharrat Jagdeo

During an interview during the afternoon break, Ms. Teixeira said parliamentary conventions all around the world, afford the Leader of the Opposition the position of closing the debate before the mover of the motion stands to his feet. She said it has been the same in Guyana long before 1992 when the PPP began its almost 23 years in government.

Ms. Teixeira pointed out that throughout the PPP’s time in office, the Leader of the Opposition was always allowed to speak just before the Finance Minister would close the debate as the mover of the motion.

Teixeira lashed out at Ally for her position saying that it is “nonsense” and she can go back to all of the parliamentary records to prove that the Leader of the Opposition would always be the penultimate speaker.

When asked what would the PPP do if Ally sticks to her position, Teixeira was quick to point out that it is the Speaker of the National Assembly and not the Government Chief Whip, who is in charge of the way things are done in the National Assembly. She said the speaker could decide if he wants a change of long-standing conventions to be his legacy.

But the PPP believes the government has a fear of having Mr. Jagdeo challenge the budget before the Finance Minister wraps up the motion.

“You want us to come into the Parliament all the time and when you come in now, you don’t want to abide by the parliamentary conventions with regards to the Leader of the Opposition but they frighten Jagdeo you know and they are terrified of this man because when he gets up to talk economics and finance, some people will get diarrhea in this place”, Teixeira said.