A post-mortem examination conducted on the body of the man this morning found that he died from complications to his lower back as a result of a gunshot wound. A Lance Corporal of the Georgetown City Constabulary remains in custody as the probe continues into the Sunday afternoon shooting death of vendor, Marlon Fredericks.

A post-mortem examination conducted on the body of the man this morning found that he died from complications to his lower back as a result of a gunshot wound.

Fredericks, had been in City Constabulary custody since Saturday after he was arrested by a City Constable during a confrontation that left them both nursing injuries.

He was accused of larceny.

After being treated for the injuries he sustained during his arrest, he was released into the custody of the City Constabulary.

On Sunday just as his mother was walking towards the Bourda City Constabulary outpost to visit him, the 34-year-old man bolted from the facility and was shot just outside on the pavement in front of his mother, who broke down in tears after pleading with him not to run. 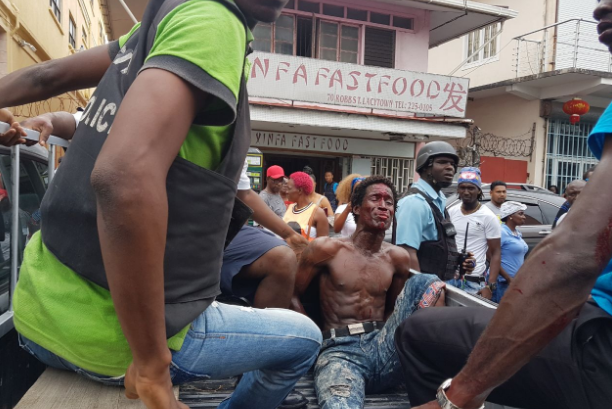 One day before being shot dead…Marlon Fredericks

Emergency medical services were not summoned and the mentally ill man bled to death on the pavement. His body remained there for over an hour as Police investigators were called in and an arrest was made.

Angry vendors outside the outpost told News Source that it was well known that the man was mentally unstable, and therefore the City Constabulary could have dealt with the issue with much more patience and caution.

“He shoot the man in cold blood and didn’t even bother to seek help for the man, just left him there to dies”, one vendor said.

Police investigators believe that the post mortem examination findings could possibly lead to serious charges being laid against the City Constable.