The Minister clarified it was more than an allegation and the matter was currently being investigated by the Criminal Investigation Department of the Guyana Police Force and the Crime Chief. Minister of State Joseph Harmon on Friday confirmed reports of fraud at the former Ministry of Public Service which involves the Chief Personnel Officer Margaret Cummings and others.

Harmon confirmed that Cummings was caught attempting to fraudulently transfer a total of eight state vehicles to private citizens including former Minister Jennifer Westford and her spouse, Gary Beaton.

Beaton who is an Engineer by profession is currently the Head of the Guyana Defence Force (GDF) Coast Guard Unit. It is unclear whether he was aware of the transfers being made in his name.

The Minister clarified it was more than an allegation and the matter was currently being investigated by the Criminal Investigation Department of the Guyana Police Force and the Crime Chief.

In the meantime, Cummings and another staff member have been sent on leave to facilitate those investigations. Harmon said on June 16, he was informed by Permanent Secretary Hydar Ally that Cummings had sent documents to the Guyana Revenue Authority (GRA) on which she affixed her signature as his. 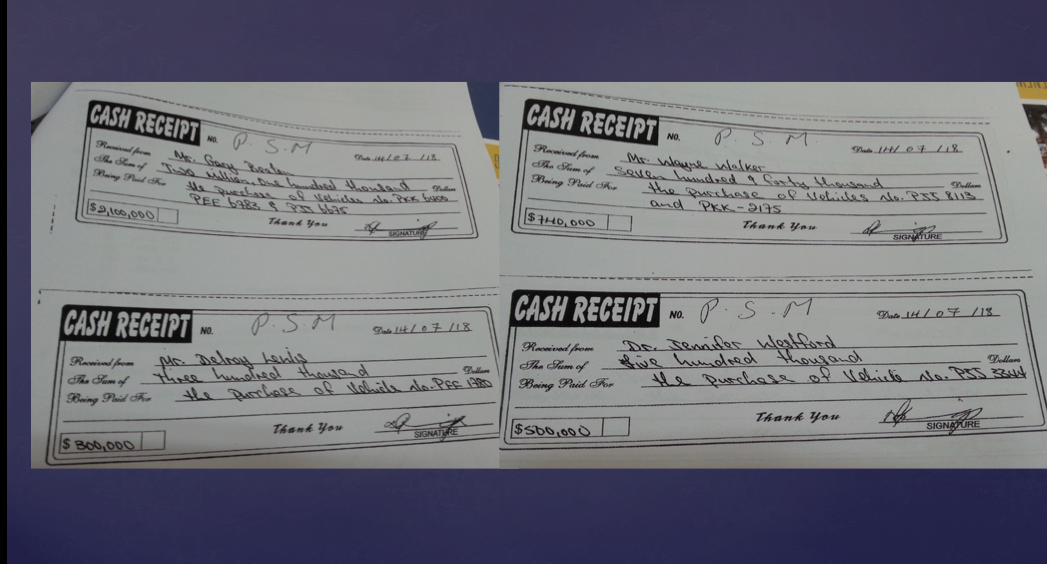 The application for these transfers included receipts believed to be bogus receipts showing that the vehicles were sold to the Former Minister and others by the Ministry. The Permanent Secretary is unaware of any such sale or the transfers and he has made that clear. Some of the receipts showed the vehicles being sold at a cheap cost. A receipt written in the name of Gary Beaton was for the purchase of $2.1 million for three vehicles.

There is also a new $9 million Kia Sorento vehicle which was purchased by the Ministry and was reportedly to be used by Westford that has gone missing.

Among the other persons vehicles were being transferred to are Wayne Walker, Delroy Lewis and Osbert McPherson.

The letter for the transfers carries an April date but was not sent to the GRA until after the elections when it became clear that the PPP Civic was being booted from office. There are reports that the Commissioner General of the GRA Khurshid Sattaur was concerned about the transfer request and raised the issue with the Permanent Secretary and it was then that the PS became aware of the scheme to transfer the government vehicles. 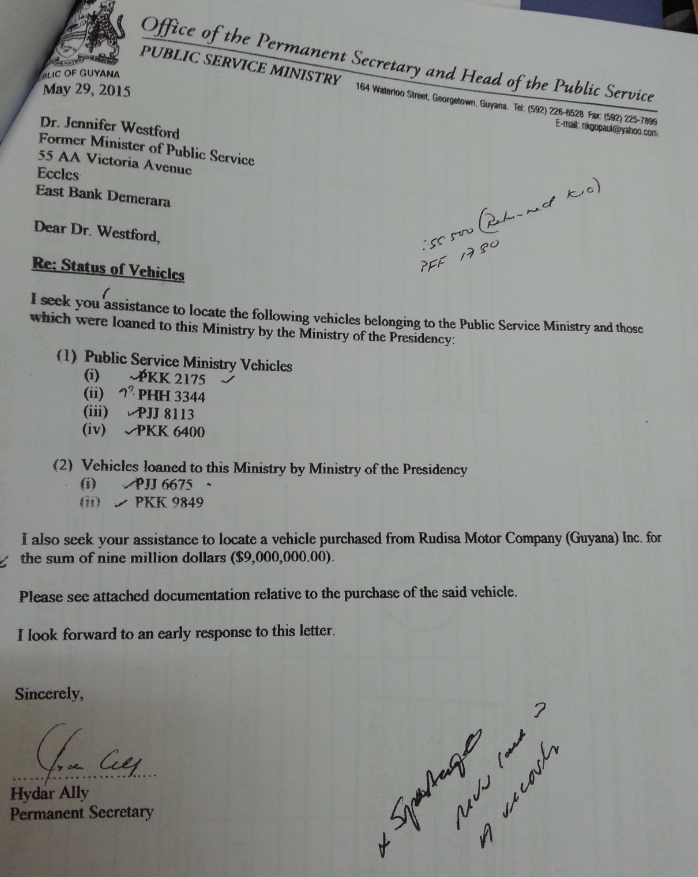 Harmon recalled that the new government had discovered that 28 vehicles along with several other assets were transferred from government to private individuals over a two day period after the May 11 elections. He is pleading with anyone who may have received assets to “quietly bring them back before any action is taken. Just park it and leave the keys in them.”

Staff members at the Ministry told New Source that after the new government took office in May, ending the People’s Progressive Party 23 year rule, Cummings was also allegedly involved in the manipulation of the Travelling Register.

The register is a document that states who gets duty free concessions and on what scale and what scale. The claim from sources at the Ministry is that she placed her position under Scale ‘A’ duty free along with several of her friends.