Deborah Backer remembered for love of family and for country A packed St. Andrews Kirk was on Friday afternoon told that the late former Speaker of the National Assembly, Deborah Jan Backer loved and treasured her family and also had great love for her country.

Hundreds of mourners packed the historic church and flowed into its yard as they said a final farewell to Debbie the Lion, the Politician, the Mediator, the Wife, the Mother and the Friend. The casket bearing her remains were taken to the Church after viewing at the nearby Public Buildings of the Parliament where she spent over a decade as a Member of Parliament.

In glowing tributes, she was remembered for her selflessness, her attention to detail and her  appreciation and love for the law as an attorney. She was also remembered for her work with the Lion’s Club and the many contributions she made to the club’s development. Those gathered were told that Lion Deborah Backer was always lending a hand and offering advice whenever needed at the Lion’s Club.

Speaker of the National Assembly Raphael Trotman quoted the Bible as he remembered that there was a time for everything under the sun, and that Deborah Backer would have wanted those left behind to laugh and cry, be sad and dance at her passing. He said she was a smart attorney and a good friend and someone who he will miss dearly. 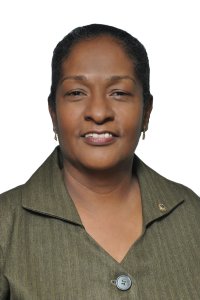 Leader of the Opposition David Granger spoke of her family heritage and being the product of a mixed race marriage.  He said her love and commitment was well-known and she will be missed for always being a guide for him and many other Members of the National Assembly. “She saw fusion where others might see confusion”, Granger said as he reminded that she was built with great values of family.

In delivering the eulogy, Justice Dawn Gregory Barnes recounted Ms. Backers thoughtfulness and compassion for others, her work as a Mediator and her commitment to family.

Deborah Backer attended the Bishops High School before pursuing her law studies at the University of the West Indies and the Hugh Wooding Law School. She has been a practicing attorney for over 30 years  and was very instrumental in the work of the Guyana Women Lawyers Association and setting up the Legal Aid Clinic in Linden.

As a trained Mediator, she was the most requested and her political  friends remember her ability to never forget an issue that was discussed and as a broker for women’s rights across the country.

Deborah Jan Backer nee Osman has left to mourn her husband Stephen and children Nigel and Natasha. She was laid to rest as the sun went down over Le Repentir cemetery.