A Guyanese born, New Jersey Attorney and his brother who could not make it  home for the holidays, thanks to the many delays of Dynamic Airways, have decided to take the problem plagued carrier to court with a class action lawsuit.

Attorney-at-Law Moses V. Rambarran and his brother Rohan found themselves stuck at New York’s JFK Airport for a number of days after Dynamic Airways cancelled a number of its flights just before Christmas Day. The two were eventually forced to purchase tickets on Caribbean Airlines to get to Guyana.

At a Wednesday morning press conference at the Ocean View Hotel, Moses Rambarran detailed his harrowing experience after the airline cancelled and postpone a number of its flights without giving previous notice.

He said he was scheduled to travel to Guyana from New York on December 22, 2014 but never got here until after Christmas Day on another airline at his own expense. Rambarran said he and his brother were forced to make several trips to the airport as the flight times kept changing. He said at one stage, they had already cleared security and was in the boarding area when they were informed that the flight was cancelled again. According to Rambarran, Dynamic had a duty to provide its customers with the service they paid for but the airline failed to do so.

The Attorney said the airport was packed with hundreds of angry travellers who were all missing their Christmas in Guyana. He said the carrier did very little to ease the frustration of the stranded passengers and very little information was being provided by the airline to the passengers. 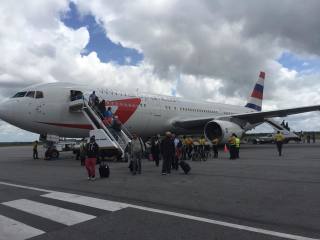 “Dynamic Airways deprived its passengers from uniting with their families for the all important Christmas season, with some passengers returning home after many years. Passengers were deprived of the right to say final farewell to loved ones whom had died and funerals were being held”, Rambarran said.

He added that Dynamic Airways “knew they could not perform their end of the bargain yet continued to take people’s hard earned money by selling tickets to unsuspecting passengers desperate to come home to be with their families on Christmas morning.”

Rambarran also expressed surprise with the silence of the Government of Guyana on the many problems facing Guyanese passengers on Dynamic Airways. He said too that he believes some travel agencies should carry some blame since they should have done background checks on the carrier before booking their clients.

According to Rambarran, the lawsuit is open for all of the passengers who  were affected by the service of Dynamic Airways. He said if there are passengers who would like to join the lawsuit, they could make contact with him through his facebook page https://www.facebook.com/moses.rambarran?fref=ts.

Dynamic Airways has been plagued by several cancellations and postponement since it restarted its service  in November. Some passengers found themselves stranded for up to three days with little explanation from the US registered airline. Over the past two days, a number of the airlines flights have been cancelled.