Recovery teams will move back into the Olive Creek area in the Mazaruni area to continue with their efforts to extract the bodies of Pilot Blake Slater and Cargo Handler Dwayne Jacobs from the wreckage of the Trans Guyana plane crash. They were the only two persons aboard the aircraft

The recovery teams were forced to suspend their operations on Monday because of bad weather conditions. Reports from sources close to the teams indicate that there was no way the men could have survived the accident.

The source explained that parts of the plane were torn apart as it crashed through the dense forests in the area.

The pilot was found pinned in the cockpit while the cargo handler was found buried under debris from the accident and drums of fuel. 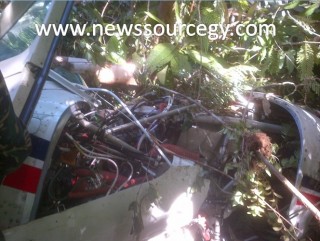 The Cessna Caravan aircraft went missing on Saturday morning just moments after the pilot reported to air traffic control that he was experiencing difficulties with the engine. Other pilots who were flying in the same area reported that the plane was seen going down into the forested area.

The Guyana Civil Aviation Authority immediately launched a search and rescue operation which continued all day Saturday and into Sunday morning.

The search and rescue became a recovery operation when the wreckage was spotted by the GDF helicopter on Sunday and ground troops were lowered into an area close to the crash site.

The Guyana Civil Aviation Authority has launched a full investigation into the  fatal plane crash.