With scores of Police officers, Diplomats, Government Officials and Administrators gathered at the Police Training College, the Government on Wednesday morning launched the National Plan of Action for the Prevention and Response to Trafficking in Persons (2017-2018). The Government of Guyana has declared an all out assault on human trafficking and will be stepping up measures to fight the scourge.

With scores of Police officers, Diplomats, Government Officials and Administrators gathered at the Police Training College, the Government on Wednesday morning launched the National Plan of Action for the Prevention and Response to Trafficking in Persons (2017-2018).

The Plan of Action represents the vision and work plan of the Ministerial Task Force on human trafficking and other support groups and stakeholders.

Social Protection Minister, Amna Ally, today declared that the country has had “enough” of the problem and its now time for the solutions.  She told the launching of the plan that her Ministry will be playing a key role in the efforts by sensitizing communities more and ensuring that victims of human trafficking are provided with the support they need.

Under the Action Plan, there will be more training of law enforcement officers, more public awareness will be raised as well as safety measures being put in place to protect and reintegrate human trafficking victims.

Additionally, the task force will also be focusing on strengthening the capacity of Prosecutors who will have to deal with cases as well as to build greater investigation skills to facilitate raids and rescue missions.

Guyana has found itself for several years on the watch list of the US State Department as a country where human trafficking takes place.  With more and more efforts to deal with the issue over the past two years, the country has been removed from that watch list and now has a tier two ranking.

US Ambassador to Guyana, Perry Holloway said the United States is proud of Guyana’s improved ranking, since the improvement recognizes the efforts of the government, the Trafficking in Persons Task Force, the TiP Unit and the judiciary in combatting the “modern-day” form of slavery.

“As always, the embassy stands prepared (and even anxious) to assist the government in the core areas of TIP- prevention, prosecution and protection”, he said.

Public Security Minister, Khemraj Ramjattan said he is looking forward to that support and more support from other government agencies, as the security forces step up their fight against human trafficking. 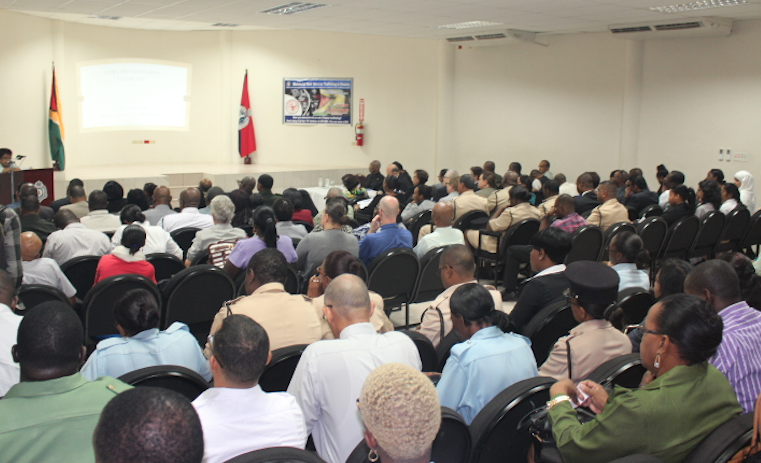 In his feature address, President David Granger reminded that as Opposition Leader, he introduced a motion to set up a Commission of Inquiry into human trafficking. Although, the motion was passed, it never got the full support of the former government.

He said his government is different and will lead the way in tackling the problem of human trafficking.

“The Government of Guyana today, is solving the problem and not suppressing bad news. We are successfully prosecuting traffickers and we are collaborating with counter trafficking non-governmental organizations and international organizations”.

Mr. Granger promised that the government will continue to strengthen the agencies that are taking on the issue of human trafficking.

The Task Force is expected to increase collaboration with its international partners in combating human trafficking in Guyana. The group will also work closer with the International Police Organisation (INTERPOL) and other orgainsations.

Citizens are being urged to play their role by speaking out against human trafficking and informing the authorities of suspected cases. “Silence is violence”, the launching was told.