Members of Parliament sitting on the Committee raised concerns over the recent list of 227 companies submitted by Exxon as Guyanese companies that it is currently doing business with ahead of 2020 oil production. Local content in the emerging oil industry took centre stage during a parliamentary engagement with US oil giant, ExxonMobil and the Parliamentary Sectoral Committee on Natural Resources on Friday.

Grilled on its commitment to local content, Exxon’s Country Manager Rod Henson, told the Committee that he believes there were misalignment expectations for local content in Guyana and insisted that the company’s level of investment locally is “quite good.”

Members of Parliament sitting on the Committee raised concerns over the recent list of 227 companies submitted by Exxon as Guyanese companies that it is currently doing business with ahead of 2020 oil production.

Exxon has been asked to submit a more comprehensive list with all the companies it is doing business with to allow for greater analysis on primary and sub-contractors.

Country Manager Rod Henson after much hesitation and repeated questioning agreed to submit a more comprehensive list to allow the Committee to do its own analysis as highlights were placed on a reported cooking contract given to a foreign company and making way for a local company to then be sub- contracted. 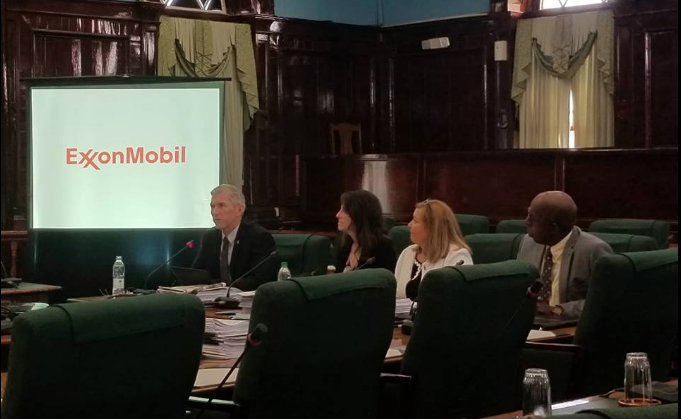 Members on the Committee also raised concerns over the inclusion of transportation and waste disposal companies included on the list and being passed off as local content.

Providing an update on the first quarter in 2018, Henson said some 585 Guyanese are currently working with the company, making up 52 percent of its workforce.

The company grew by 40 employees of which 28 are Guyanese, Henson added.

Exxon said it did business with 227 Guyanese companies in the first quarter of the year for which some US$14.1 million was invested in the economy.