Persaud said although there are times when the police would not be satisfied with the advice of DPP, it usually accepts the advice in criminal matters. Recently retired Commissioner of Police Seelall Persaud took the witness stand at the Lindo Creek Commission of Inquiry this morning and testified that he supported advice from the Director of Public Prosecutions for the Police to close the investigation into the murder of the eight miners and not proceed with further action.

Although the DPP’s advice came many months after the shooting and burning of the eight miners at Lindo Creek in June 2008, Persaud who was Crime Chief at the time said he was comfortable with the advice.

Persaud said he was not surprised that the DPP had given that advice since the police had already established that it was the then notorious ‘fine man’ gang that had committed the heinous act.

But Commissioner of the Lindo Creek CoI, Justice Donald Trotman, said he remains surprised that such advice was given and accepted by the Police.

The advice never urged the police to conduct an inquest or proceed with Prosecution although one member of the gang was still alive.

Persaud said although there are times when the police would not be satisfied with the advice of DPP, it usually accepts the advice in criminal matters.

The former Top Cop said at the time the advice was given, the perpetrators were all killed with the exception of one, who was cooperating with the police.

Persaud who said he never supervised the investigation until the final months, told the CoI that the evidence collected would have shown with some amount of certainty who was responsible.

He said an inquest would have only been necessary if there was uncertainty on who was responsible for the killing.

The then Crime Chief said the police was satisfied with the evidence on who killed the eight men in June of 2008 at Lindo Creek.

This is despite claims by a miner and relatives of one of the persons killed that it was the Joint Services and not the Fineman criminal gang that was responsible for the murders.

Persaud said the DPP’s advice meant that the file would be closed unless new information was offered that would have suggested that there was new evidence.

The retired Police Commissioner also told the Commission of Inquiry of a visit to the Christmas falls by himself and several other ranks about two weeks before the Lindo creek incident. 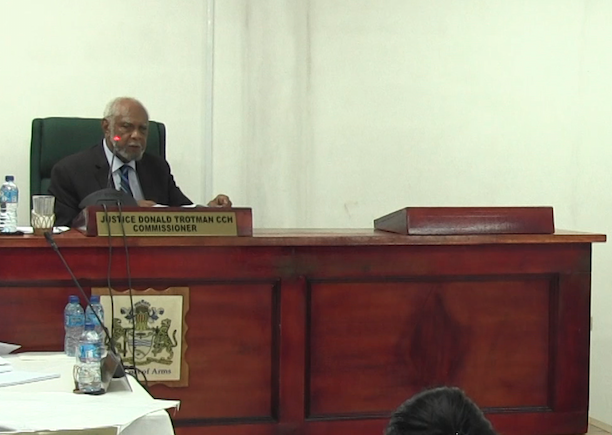 He said he was advised by then Commissioner Henry Greene that Rondell Rawlins aka Fine Man and his gang, were in the area.

After arriving in the area on June 5th, the unit of Policemen went to a camp where they suspected the gang to be on June 6th and came under fire.

They returned fire killing one man and later reported that the others along with fine man crossed a creek and went into the direction of Lindo Creek.

It was on the 21st of June that the charred remains of the eight miners were discovered at the Lindo creek mining camp.

Persaud was asked about the topography of the land between Christmas falls and Lindo Creek and told the CoI that to his knowledge, it was hilly.

He was later told that according to information, it was that same topography that prevented a pathologist from getting to the area to carry out a post mortem examination.

But Persaud insisted that there was scientific and forensic evidence to support the police findings about who was responsible for the murders.

That evidence was in the form of a post mortem report.

But the Commission said no PME was in the file that was laid over and there is no evidence that any Pathologist conducted a PME.

This is although the remains were brought to the city and kept at a funeral parlour for several years before being buried together on the advice of Persaud.