The strength of the Guyana Defence Force has increased with the addition of 276 new soldiers who have completed 10 weeks of training on the army’s first  Basic Recruits Course for the year.

The passing out parade for this latest batch of entrants was held on Friday at the Drill Square at the Colonel John Clarke Military School at Tacama , Upper Berbice.

In an address to the new soldiers,  Chief of Staff, Brigadier Mark Phillips, congratulated the soldiers for their endurance , leading to their successful completion of the course.  He expressed the hope that the process of training has instilled in the new soldiers , the qualities of serving correctly and being effective ambassadors of the GDF, and, by extension , the country.

“In this regard, he singled out the core value , ‘discipline’ , and stressed that to be good soldiers , they must also understand their rights and obligations under military law, and , at all times , practise and uphold the values and standards of the GDF”, a release from the GDF said.

Brigadier Phillips reminded the new soldiers that it was incumbent that they keep continuing education in focus , as they perform their duties as soldiers. “ During your career , work hard , be disciplined and make use of all the opportunities available to you for your professional and educational development , “ he urged. 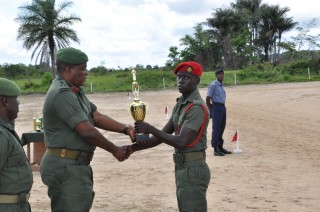 Three hundred and five recruits started training at the end of May. A total of 30 withdrew for various reasons . Two – thirds of the new soldiers were  trained at the Colonel John Clarke Military School (CJCMS) at Tacama, while the remainder  were trained  at GDF Base Camp Seweyo on the Linden-Soesdyke Highway. Those  trained at Seweyo, have been posted to the technical and speciality units of the Force.

Vernon Harding, the rank who was injured in the accidental shooting incident, was also promoted to the rank of Private. He continues to improve at the medical facilities at Base Camp Ayanganna.

The Basic Recruit Course provides induction training for entrants at the Ordinary Rank level . It is intended to produce fit , obedient , loyal and discipline soldiers who possess high standards of skills and marksmanship abilities.