The Government of Guyana on Thursday declared that the outgoing British High Commissioner to Guyana Andrew Ayre, ought to be accorded the status of a “pariah” after expressing his government’s concerns about the ongoing prorogation of the Guyana parliament.

The High Commissioner is expected to leave Guyana in February after completing his tour of duty for three years.

Luncheon told the media that “High Commissioner Ayre is terribly dishonorable. Knowingly mis-depicting prorogation in Guyana as a Constitutional crime severe enough to utter that S word…sanctions that is so bandied around today in international discourses.”

“The sentiment is that he needs to be accorded the status of a Pariah and his departure is eagerly awaited by the Government of Guyana”, the Cabinet Secretary said.

According to Luncheon, the High Commissioner’s statements about the United Kingdom wanting to hold back developmental funds, may have pointed to an explanation for recent decisions by the United Kingdom and the European Union to no longer offer Guyana “budget support”. 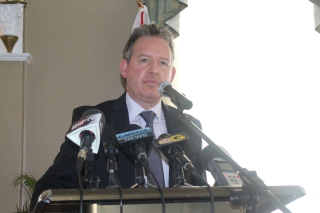 He said the threats of withdrawing and withholding aid “hurts” because the British have been instrumental in organising and contributing in developmental aid that Guyana has received over the years.

At a Monday morning press briefing, the British High Commissioner said there could be possible sanctions by the United Kingdom and the Commonwealth for Guyana not sticking to the Commonwealth Charter which focused on democracy and a recent Declaration that was signed onto by Commonwealth Leaders including President Ramotar.

High Commissioner Ayre said the Guyanese President needs to lift his suspension of parliament since the ongoing suspension has created a country that does not have a functioning democracy.

He noted that under the circumstances, the United Kingdom would not be able to justify to its taxpayers why it was still sending developmental funds to a country which has no functioning democracy and no parliamentary oversight at the moment.

Luncheon used most of his press conference to  lash out at the British High Commissioner and his statements. He described the actions of the High Commissioner as “unpardonable”. He further noted that “there must be something about leaving Guyana that encourages Western Diplomats and Heads of Missions to engage in final fetes of folly”.

He made reference to the last public statements made by the former US Ambassador to Guyana Brent Hardt. Just before leaving the country, Hardt also raised concerns about the state of democracy in Guyana. His statements earned him a “feral blast” from the acting Foreign Minister of Guyana at the time, Priya Manickchand.

When asked by News Source whether the Government had paid any attention to the London statement of the British Foreign Minister Tobias Ellwood, about the prorogation of the parliament in Guyana, Luncheon said the Government has explained that the prorogation will remain in place as the President gets ready to call early elections. He said he is not sure what more explanation the Guyana government could offer to the British unless the Foreign Minister wants to come to Guyana and decide on a date for the elections himself.

The British Foreign Minister in a statement from his London office last week said “the UK Government views with concern the continued prorogation of Parliament by His Excellency President Ramotar and calls for its earliest possible resumption. Parliament is required by Guyana’s Constitution and the Commonwealth Charter, it provides the necessary checks and balances and enables citizens’ voices to be heard”.

During a Tuesday interview with News Source, the British High Commissioner said he would not be surprised by the government’s response to his concerns because “anyone who says anything that the Government doesn’t agree with, they try to demolish and discredit”.

One Response to "Govt. labels British High Commissioner a “Pariah” for his prorogation concerns"