According to a statement from the company, the move comes following an "intensive review by the new Board of Directors in consultation with its Executive Management team". The Guyana Power and Light Company has announced that with effect from April 1, 2016, there will be a 20% reduction in net rates for the supply of electricity across all Tariff categories.

According to a statement from the company, the move comes following an “intensive review by the new Board of Directors in consultation with its Executive Management team”.

The Company also took into account the reduction in world market prices for fuel over the past year, which has favorably impacted its overall costs “and wishes to pass on the benefits of these reductions to its Customers.”

GPL said the reduction will be applied as a 5% reduction on the basic rate of both fixed charge and energy charge, and a further 15% fuel rebate on the energy charge.

“Given that the Company had previously applied an interim 10% fuel rebate on the energy charge in March 2015, the overall effect would see an additional 10% reduction on electricity bills”.

GPL said it would wish to reduce tariffs even further, but is constrained by its current level of overheads and by the technical and commercial losses, which in 2015 amounted to 29.2% of dispatched power.

“These losses include losses in transmission and distribution due to aged infrastructure, as well as theft of electricity, meter tampering and other non technical losses.”

The Company said it is actively engaged in addressing the losses and has approved a capital programme of G$9.5B. The programme is intended to replace old generating assets, construct and upgrade substations, expand and upgrade the transmission and distribution network, expand smart metering, amongst others.

In addition, GPL is engaged in a Power Utility Upgrade Program financed by the Inter American Development Bank (IADB) with grant funding from the European Union (EU) to the tune of US$64M. This Program is intended to strengthen management, improve operational efficiencies and reduce losses. 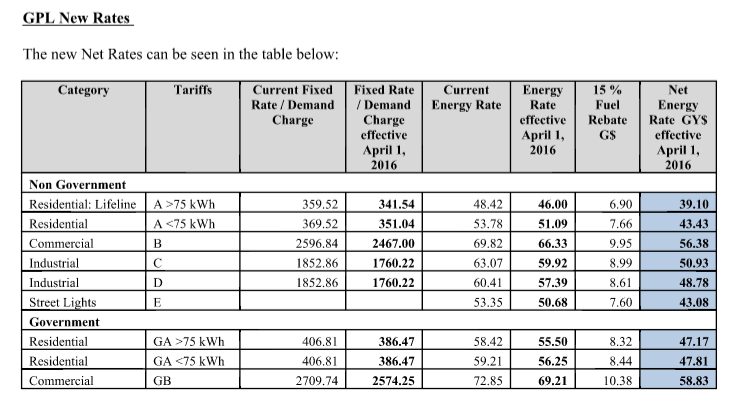